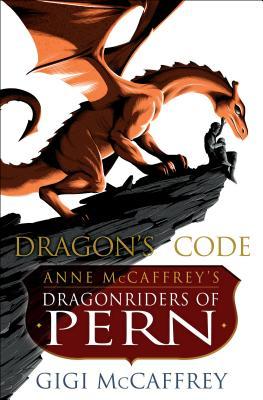 I received a copy of Dragon’s Code through NetGalley in exchange for a fair and honest review.

First and foremost – I can’t believe how quickly time flies! Did you know that this year marks the fiftieth anniversary for the Dragonriders of Pern series? Okay, I can’t really comment on how quickly that time actually flew, not being alive for half of it…but still. It feels like just yesterday I was picking up my first book by Anne McCaffrey and losing myself in her words. So it seems right, in a way, that they’re using this momentous occasion to try something new in the world.

I know I’m not the only fan out there that has greatly missed getting new books from the Dragonriders of Pern series. However, I long ago came to terms with the idea that I would never be seeing any news works from it – after all, Anne McCaffrey had sadly passed away, and the previous attempts made to keep the mantle going weren’t impressive (for me, at least).

So imagine my surprise when I learned that Gigi McCaffrey was writing her own original story set in the Dragonriders of Pern world. At first I’ll admit I was a little hesitant, but after looking at the book for a couple of days I decided to just go for it and give it a try. After all, what’s the worst that could happen?

I was shocked. I honestly think that if you had handed this book to me when I was younger and very much into Anne McCaffrey, I never would have been able to tell the difference. Gigi did a wonderful job capturing the essence of the world and the writing style that her mother used.

Now, looking at this book compared the others, as an adult and a book reviewer, I can clearly tell some differences, but honestly? I’m okay with that. Gigi McCaffrey is a writer in her own right, and I think I’d be disappointed if she didn’t try to do things her way.

I’ve always loved the Dragonriders of Pern series. I loved the explanation for how dragons came about, why they were important to the people, and the world that was built around it all. It was enchanting and enthralling.

Reading Gigi McCaffrey’s take on her mother’s world was interesting. I love that she chose to keep so many of the core elements – I don’t think I could have considered it the same world without those pieces. I can clearly see her mother’s influence, but I can also see what parts of the world Gigi McCaffrey enjoyed writing the most.

It was so great to be reading this series again, but I’ll be brutally honest with you. I know I wouldn’t have just accepted anything from this series. I remember when I was on my Anne McCaffrey reading kick – the last three I read just didn’t read that well, and really put me off of her writing for a while. It wasn’t until later that I learned that it had been her son writing those books under her name. But it explained everything about why I hadn’t liked those books.

I hope that helps you believe me when I say that Gigi McCaffrey did a great job capturing the important parts of this series. This really did feel like diving back into the series, as opposed to diving into a series that is sort-of-like-the-original-but-not-really.

I really enjoyed the main character, Piemur. He had an interesting character arc, one part coming of age and one part learning to appreciate the situations that other people can find themselves in.

Words cannot express how happy I was to see Menolly and all the others again too. I sincerely hadn’t expected cameos, let alone major parts, from characters I had previously read about. That was a nice touch.

Obviously it was so wonderful to see the dragons and fire lizards again too. While I have always loved the dragons, there will always be a special place in my heart for those cute little fire lizards. The girl in me still wishes I could have one.

I can’t believe how excited I am about this series, all over again. It’s almost – but not quite – like finding the series again for the first time. I do hope that Gigi McCaffrey continues to write for the series. I’m not sure if she’s written anything else, but after this I clearly need to take some time to look into her works some more.

I am an avid animal lover, photographer, reader, and much more. While my photography blog is feeling a bit neglected at the moment, the other sites I'm involved in are going strong. ✧I review books, comics, and basically anything else in the literary world over at Quirky Cat's Fat Stacks (of Books). ✧I review comics and books, as well as write content for Word of the Nerd. ✧I review comics for Monkeys Fighting Robots. ✧I write content for Screen Rant and CBR. ✧I write book reviews for The Review Crew.
View all posts by Liz (AKA Cat) →
This entry was posted in ARC, Fantasy, Uncategorized and tagged Anne McCaffrey, Book, Book Review, Books, Dragon's Code, Dragon’s Code: Anne McCaffrey’s Dragonriders of Pern by Gigi McCaffrey, Dragonriders of Pern, Fantasy, Gigi McCaffrey, Literature, Review. Bookmark the permalink.