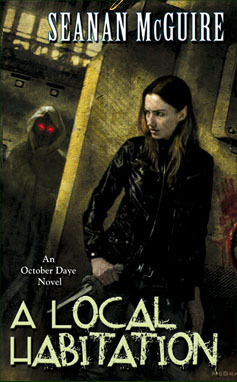 A Local Habitation is the second in the October Daye series, which currently is twelve books long…if you don’t count all the novellas and short stories that are also included in the world. To say it has a rich world and plot would be a significant understatement.

Toby Daye is back for another adventure, and as usual, she’s not entirely enthusiastic about the whole ordeal…but that’s why I love her. I’m so happy that there is still so much to Toby’s story left for me to read…even if I am slightly intimidated by how much more reading I need to do in order to get caught up (still wishing I had read this series earlier…).

For those that are new to the series, or haven’t read any of it yet, I strongly urge you to stop and look up Rosemary and Rue, the first novel in the series. It’s absolutely worth the read, and you really don’t want to skip it. I also have a feeling that this is the sort of series where you’ll want to be avoiding spoilers as much as possible…but then again I tend to do that with any series, so that may just be my bias showing.

I don’t know if this is the norm, but I made a plan for my read through of the series. I’m going to read all the novels first, and then track down the novellas. It looks like it may be difficult to find some of them, so I figure I’ll leave that towards the end. If you’ve read the series, and think I should be reading the novellas chronologically as well, please let me know!

It seems like no matter how hard Toby tries to distance her from the fae and everything they entail, they somehow manage to pull her back into their lives. I suppose this shouldn’t be terribly shocking – the fae don’t exactly have a reputation for caring how others feel on certain matters, after all.

Last time it was the death of a friend that pulled Toby back. This time it’s her liege’s absent niece causing the trouble. Not literally, or at least probably not. She just hasn’t been checking in lately, which is worrying in and of itself. To make matters worse though, she’s not exactly in the safest or most stable territories…which explains why her uncle is essentially freaking out.

I will say that I love Toby’s character. You can clearly see that she’s striving to find some balance in her life. I’d say that while she would love some distance from the fae again, by the beginning of this novel she’s accepted how unlikely that is (as evidenced by her newest ‘pet’). Still, attempts are made at boundaries, frustrations expressed, magical barriers put in place…she’s trying to keep some parts of her life to herself.

It’s almost amusing, watching Toby deal with her two conflicting worlds. It almost seems like the more she struggles against one, the more it sucks her in. And yes, I do feel that it also applies to the human world, just with different laws and obligations.

I also have to say that I’m still shocked by how much I’m enjoying this series. I’m a self-admitted fae-snob, but Seanan McGuire does a wonderful job of doing right by the legends, while still making them her own. That’s no small feat, so please give her credit where credit is due.

Additionally, I can safely say that I never expected to see such a blend of magic and tech as shown in A Local Habituation. It was beautifully done. I wish more magic systems were done this way, truth be told.

As for the plot itself… I really enjoyed trying to put all the pieces of the puzzle together myself. McGuire did a wonderful job of laying it all out for me, but without giving anything away. It’s a balance that many mystery fans crave (myself included) so I really couldn’t ask for more there. More than that though, I loved trying to figure out what was going on with a couple of specific characters (what type of fae they were and what they were up to). So it probably goes without saying that I was thoroughly entertained during this read through.

Oh, and before I forget; you don’t have to worry about Toby’s two cats (or her new pet) this book. They don’t really make an appearance after the introduction of the plot is out of the way. There are other cats that do get hurt though. Nothing is ever outright said though, just heavily implied and danced around…so try not to think about it too much, okay?

Next up on my list is An Artificial Night. I already bought and downloaded it, and I still can’t wait to get started! I have faith that it’ll hold up to the others. I’ve read enough of Seanan McGuire’s works to stop worrying about that.

I am an avid animal lover, photographer, reader, and much more. While my photography blog is feeling a bit neglected at the moment, the other sites I'm involved in are going strong. ✧I review books, comics, and basically anything else in the literary world over at Quirky Cat's Fat Stacks (of Books). ✧I review comics and books, as well as write content for Word of the Nerd. ✧I review comics for Monkeys Fighting Robots. ✧I write content for Screen Rant and CBR. ✧I write book reviews for The Review Crew.
View all posts by Liz (AKA Cat) →
This entry was posted in DAW Books, Fantasy, Uncategorized and tagged A Local Habituation, Book Review, Books, DAW Books, Fantasy, Fiction, Literary, Literature, October Daye, October Daye #2, Review, Seanan McGuire. Bookmark the permalink.