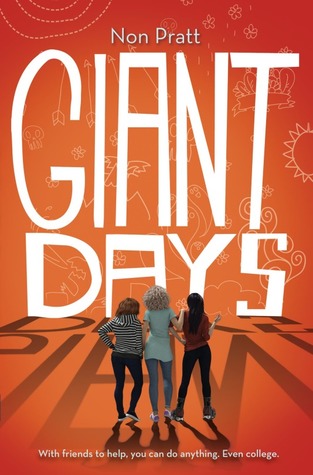 I received a copy of Giant Days through NetGalley in exchange for a fair and honest review.

I have fantastic news: the wonderful graphic novel series Giant Days now officially has its own novel! Yes, you read that right. The novel shares the same titles as the series itself, but I honestly hope they’ll come out with more than just the one.

Giant Days is perfect for both the fans of the series and people who would otherwise try the series if not for the fact that it was a graphic novel. There’s a lot of overlap between this and the series, but I considered that a fun refresher more than anything. Plus there are more details for the scenes that were repeated, so I’m not complaining. However I know that’s something that not everyone is into, so keep that in mind.

When I first saw that Giant Days was being turned into a novel I knew I had to get my hands on it a.s.a.p. I only recently finished binge reading the series for the first time, so a lot of the events are still relatively fresh in my head. It made for a comfortable transition for me, and sort of helped with the withdrawal I was feeling from not having any new Giant Days (the graphic novels, that is) waiting for me.

This was a really fun and mostly light read. There were times, like in the graphic novels themselves where their adventures got too real and dark (like when Esther gets drugged at a party or that time Daisy got lonely and tricked into joining a cult), but it balances out really nicely with the quirky and lovable personalities of our leading cast. I honestly just can’t enough of these ladies, so I’m so happy that they’re transcending their original media.

If you’re looking at this and humming and hawing, let me assure you that Pratt perfectly translates all of our favorite characters into this new medium. Seriously, I could picture almost every scene as if I was looking at the graphic novel instead. Their tone of voices carried over perfectly from images to text and I couldn’t have been happier with the end results.

It was certainly fun to have some of their adventures fleshed out in more detail. While I adore the fast pace for the Giant Days series, sometimes it’s fun to slow down and get a few more details on the situation. I’ll be curious to see what happens in future novels (if they happen). Will they continue to go over all the plots in the graphic novel series, or will they branch off and start doing their own thing? I honestly think I’d be okay with either, though both would be ideal…

Pratt did a great job of balancing the time spent with all three main characters, just like the series it’s based off of. Never once did I feel like a character was getting neglected or overshadowed by the other two. I do feel like we saw less of McGraw and Ed, but then again we’re back to the earlier stuff where they weren’t quite their own characters yet, so that makes sense.

I’m still a bit surprised by how well Giant Days transitioned into novel form. I know I said this already, but I really do hope that they continue with this line of thinking. I also wouldn’t mind some novellas that are short stories not yet shown in the graphic novel series. That would be fun. In the meantime I’m just grateful that this helped me bide my time until the next issue drops.

I am an avid animal lover, photographer, graphic designer, and much more. I love to create art, and am willing to try any artistic technique at least once. I am particularly fond of artworks involving a lot of emotion and color. The purpose of my blog is for me to be open and honest with myself and the world about my attempts to grow as an artist. My other major passion is reading. My TBR pile is larger than I'll ever be able to read, and yet I can't resist adding to it on a nearly daily basis. I love to read science fiction & fantasy, graphic novels, and pretty much anything I can get my hands on. I have a couple of blogs, as you can see. One is primarily my photography, while the other are my book reviews. If you have any questions, feel free to reach out!
View all posts by Liz (AKA Cat) →
This entry was posted in Fiction, Uncategorized and tagged Book, Book Review, Books, Literature, Review. Bookmark the permalink.