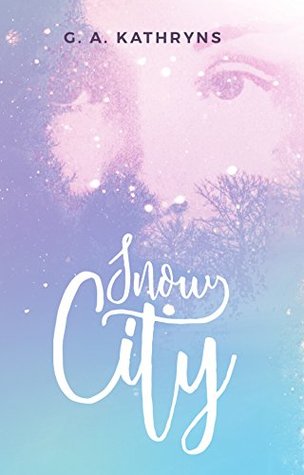 Snow City is G.A. Kathryns’ debut novel, though you probably couldn’t tell that at first glance. Like many novels I pick at random to read; it was the cover that originally caught my attention, and the description that convinced me to give it a try. If you’re looking for a relatively light and relaxing read (with a few exceptions; such as the climatic point in the book) where you can escape reality (much like the main character herself), then this may be the perfect novel for you.

It takes a little while for Snow City to find its feet. Or maybe it took me a little bit to adjust to the writing style. Either way, there was a bit of an adjustment period, but once you get beyond that you’ll find yourself in a unique world that’s both similar and dissimilar to our own.

Echo Japonica (I love the first name, but am less sold on the surname) is on the run, but it isn’t what you think, I promise. She’s on the run from reality, and thus she dreamt up Snow City. It’s a paradise, especially when compared to the horrors of Echo’s former world and life. Here she can fit in, go about her life, and not have to witness tragedy on a regular basis. In her world of dreams, everything is perfect.

Except, is it really? If the world is of Echo’s creation, formed solely from and in her dreams, doesn’t that mean her nightmares could eventually find their way in as well? And what about the people in the world? Are they are sentient as you or I, or are they merely props? If they’ve gained sentience, then they can make decisions of their own, which means they can actively alter Echo’s world by their choices. It’s an interesting conundrum, to say the least.

One thing that threw me off in the beginning was the feeling of constant repetition. It felt like for the first chapter or two (maybe a bit less) every few paragraphs we were forcibly reminded that this world isn’t real, and that Echo dreamed it up. I know part of this was establishing the world, and part was likely Echo’s internal monologue (and reminder to herself), but it was slightly off-putting. Once the plot moves forward and we’re no longer concerned with establishing the world, it’s a little more comfortable and the words fly more easily. So if you’re debating on if it’s worth continuing, I’d suggest you get through the first couple of chapters before you put it down.

Once past that point I was able to see the richness of the world created, and was able to appreciate the characters as well as the slight (yet intentional) differences between the real world and Snow City. I enjoyed pondering the realness of the city and of the people that reside in it, and found myself wondering if Echo ever had that concern as well. All of these little elements ended up forming together to create an intricate reality, one that I hadn’t been expecting.

In the end I’m happy I read this novel, and had my own little escape from reality along with Echo. The novel raised some interesting questions for me, and I’ll be curious to see where the author goes next. They could easily leave this as a standalone, or they could continue with the world if they so choose (though I’d guess they’d use a new perspective in that case). I’ll be keeping my eye out.

I am an avid animal lover, photographer, graphic designer, and much more. I love to create art, and am willing to try any artistic technique at least once. I am particularly fond of artworks involving a lot of emotion and color. The purpose of my blog is for me to be open and honest with myself and the world about my attempts to grow as an artist. My other major passion is reading. My TBR pile is larger than I'll ever be able to read, and yet I can't resist adding to it on a nearly daily basis. I love to read science fiction & fantasy, graphic novels, and pretty much anything I can get my hands on. I have a couple of blogs, as you can see. One is primarily my photography, while the other are my book reviews. If you have any questions, feel free to reach out!
View all posts by Liz (AKA Cat) →
This entry was posted in Fantasy, Uncategorized and tagged Book, Book Review, Books, Fantasy, Literary, Literature, Review. Bookmark the permalink.