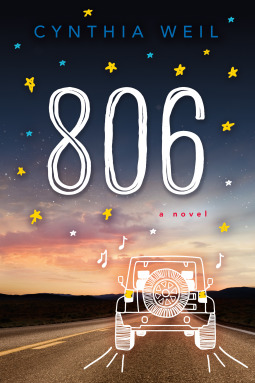 I received a copy of 806 from Bookishfirst in exchange for a fair and honest review.

It’s been a while since I read a coming of age story, and 806 seemed really different and unique, so I wanted to give it a try. It’s the story of three siblings (well, half-siblings if you want to get technical) heading out on a quest together to find their father. It sounded nice and light and cheerful, something I could desperately use right now (between reading one too many thrillers and the constant winter weather fluctuations, something happy sounds perfect right about now).

Our three main characters, KT (real name Katie, but insists on it being pronounced Kay-tee), Jesse, and Gabe. KT is pretty much a walking teenage girl stereotype; she’s in a rock band, dyes her hair, is a vegetarian, and a total brat. She’s also the main perspective for this story. The three children have nothing in common, except for the fact that they all have the same father. They all have the same sperm donor, number 806, as their father. Together they’re hoping to find him.

I wish I could say I ended up enjoying this book, especially because I really wanted a change in what I was reading, and this seemed like such a perfect choice. Unfortunately I didn’t, and it was actually a struggle to finish this one.

I will say that while I was annoyed with the book at parts (more on that later), I did really enjoy the lighter tone for the writing style. The problem is it really shouldn’t have been as light and fluffy as it was. It was jarring to have these kids trying to figure out who they are by hunting for their father – something that’s incredibly difficult to deal with, and yet the tone is pretty jovial. So while it was a bit odd, it did carry me through a good chunk of the book that way, so I guess I appreciate it.

Part of the problem was I really didn’t like KT. While she may be a teenager that does not excuse the way she treats everyone around her. She stomps all over her mother, saying nasty things that she knows will hurt her, all to get her way. She hated her step siblings on sight, because they weren’t ‘cool enough’ for her. And to make matters worse, she’s a pushy vegetarian that makes all others look bad. A toxic combination, to say the least.

I also have some real concerns about some of the subject matter in this book. All throughout the novel KT is being…well to be frank she’s being stalked. There’s a guy that has a massive crush on her, and even though she’s been more than clear about her lack of interest in him, he continues to pursue her and ask her out. He even goes so far as to hitchhike across the country to follow her. I can’t say this firmly enough: this is not healthy. Everyone reacts like it’s no big deal, and actually judge KT for telling him no. Again, this is not okay. In the end (spoiler warning) KT even ends up with the stalker. Let me say it again, this is not healthy or okay. I feel like the book went out of its way to normalize what is so very clearly an unhealthy and dangerous relationship.

My other concern has to do with the trouble of finding the children’s father. The whole thing is told in a fantastical sort of way, with unrealistic twists and turns throughout. It’s not being at all sensitive to the fact that there are real people in the world who have “do not contact” sperm donors for parents, and it doesn’t magically work out for them like it does here. This is also where the jovial tone really doesn’t help the plot. How am I to believe that any of these kids are actually struggling about who they are, when none of them actually seem to care? (Discounting the occasional temper tantrum here and there).

On the whole this book was a huge flop for me. Maybe if I hadn’t gone into it hoping to love it…but no I still think I would have hated KT and the really unhealthy subtext to this story. It’s such a shame too, because if this actually had been a happy story to match the writing style I might have loved it.

I am an avid animal lover, photographer, graphic designer, and much more. I love to create art, and am willing to try any artistic technique at least once. I am particularly fond of artworks involving a lot of emotion and color. The purpose of my blog is for me to be open and honest with myself and the world about my attempts to grow as an artist. My other major passion is reading. My TBR pile is larger than I'll ever be able to read, and yet I can't resist adding to it on a nearly daily basis. I love to read science fiction & fantasy, graphic novels, and pretty much anything I can get my hands on. I have a couple of blogs, as you can see. One is primarily my photography, while the other are my book reviews. If you have any questions, feel free to reach out!
View all posts by Liz (AKA Cat) →
This entry was posted in ARC, Uncategorized, Young Adult and tagged ARC Review, Book, Book Review, Books, Literary, Literature, Review. Bookmark the permalink.