Review: Search and Rescue (Surviving the Evacuation #11) by Frank Tayell 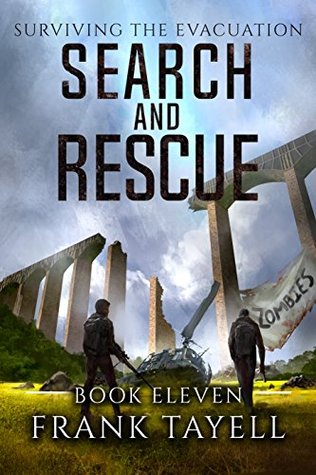 One would think that a series that’s eleven books in wouldn’t have many surprises left, but man does Frank Tayell prove that wrong. Search and Rescue is the eleventh book (out of at least thirteen, possibly more?) in a series, and I found myself enjoying it at much as I had the first ones. This series ages well, the intricacies placed previously adding and mixing to create a detailed and well balanced world.

Warnings first: Two of the characters (for the sake of spoilers, I won’t say who) end up being held captive by a pretty nasty guy. He loves to hurt people, so he takes the time to torture both of them. While we’re not forced to see it happen, that doesn’t change the fact that it happens. Additionally, it’s implied more than stated, but not in a too-subtle to pick up way. You know the male character was beat horribly, and that the woman was raped. There’s no denying it. So just consider yourself warned.

I think this is the first book in the series that had so many different perspective switches; which is interesting, considering how far along we are. Multiple characters that have been introduced previously had a chance to give their say, and their different perspectives gave us a chance to see the story in full (where everyone else just had the pieces). I hadn’t anticipated this particular storytelling method, but it actually works perfectly with this series.

Obviously Bill is one of the characters who’s perspective we sees (I think there were only two books in this series where it wasn’t the case? Not counting the spin-off with his brother), but I’m not going to list the other characters, as they’re actually huge spoilers for the series. Seriously, when one of them started ‘talking’ I had to stop and think about the last time I saw him/her. I was shocked.

I’m actually feeling a bit torn on the whole thing – on the one hand it was great to see so many different perspectives in one novel (as opposed to having to wait until the next book dropped), but on the other there were times were I didn’t want to leave a character, or something like that. I think on the whole I enjoyed it, it was just the fact that it was different that really threw me through a loop.

I don’t think I’ve ever read a zombie series as detailed as Surviving the Evacuation, I mean, we’re eleven books in now, and the survivors haven’t even gone a year since day 0. That’s pretty insane, when you think about it. I love that along with the main plot (which is fairly obvious, by now) but Tayell also has each set of characters have their own individual plots and mysteries to focus on. Together we get an insanely cohesive idea of how the world is functioning, post-apocalypse.

What is really interesting about Tayell’s writing is the balance of showing humanity at its best and at its worst. We see people working together, going out of their way and risking their lives to save people they don’t even know, people adopting orphan children, all of these wonderful moments. But we also see the bad, like what happened with the evacuation, or Sorcha Locke and her crew. There’s a full representation of morality here, and it’s interesting to see. It has the side effect of having us see the different levels of hope people carry within themselves, and I love that as much as anything else.

I have only one more novel to read until I’m caught up to the current publishing point. I’m not sure if I’m excited about it, or dreading the wait that’ll come after it. Either way, I’m probably going to read the next one sooner rather than later, no matter what I end up telling myself. I just love this series so much.

I am an avid animal lover, photographer, reader, and much more. While my photography blog is feeling a bit neglected at the moment, the other sites I'm involved in are going strong. ✧I review books, comics, and basically anything else in the literary world over at Quirky Cat's Fat Stacks (of Books). ✧I review comics and books, as well as write content for Word of the Nerd. ✧I review comics for Monkeys Fighting Robots. ✧I write content for Screen Rant and CBR. ✧I write book reviews for The Review Crew.
View all posts by Liz (AKA Cat) →
This entry was posted in Dystopian, Uncategorized and tagged Book, Book Review, Books, Dystopian Review, Literature, Review. Bookmark the permalink.

1 Response to Review: Search and Rescue (Surviving the Evacuation #11) by Frank Tayell