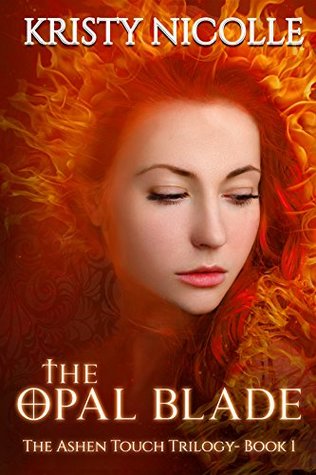 I received a copy of The Opal Blade in exchange for a fair and honest review.

The Opal Blade is the first in the Ashen Touch Trilogy by Kristy Nicolle. Fans of Kristy Nicolle know that she favors strong, independent, and stubborn characters, and Sephy Sinclair absolutely fits that description (perhaps one could even throw in a few stronger adjectives). If you’re looking for a read with a new twist on hell and its inhabitants, then perhaps this is the series for you.

I’ll admit that I felt some hesitation about reading The Opal Blade, which had nothing to do with the author but rather the subject matter. I’ve read so many stories about hell and the demons/demigods/meta humans within it that the subject has become rather dry for me. Sometimes it feels like every potential angle has already been covered countless times. Then I find a book like this that reminds me that those opinions are rarely accurate, and sometimes one has to dig to find the hidden gems in a given genre or subject.

I think what really made this series stand out from all of the other hell based ones is the main character; Sephy Sinclair. She’s all the adjectives I used above to describe her (strong, independent, stubborn) but so much more than the sum of all those terms. When put in impossible and overwhelming situations, she does everything in her power to add her flare to the mix. She makes the circumstances her own; in a way she steps up and owns everything in a way I never could. I respect that.

The supporting cast was pretty decent as well, though I imagine we might all vary on who our particular favorites are. I imagine most will enjoy Xion’s character, though being an animal lover myself, I’ll admit I was biased towards a certain, giant fluffy beast.

Now that the world building has been completed, I’ll be curious to see what is in store in the following novels (I do hope this becomes a trilogy). I feel that because everything has been established now, Kristy Nicolle will be able to spend her time and talent on further developing her characters and plot, which is always fantastic to see.

From my understanding, I probably should have read the Tidal Kiss Trilogy first, as there are some crossovers that occur. That being said, I had no trouble understanding anything, and don’t really have any regrets about the order I read them in.

I am an avid animal lover, photographer, reader, and much more. While my photography blog is feeling a bit neglected at the moment, the other sites I'm involved in are going strong. ✧I review books, comics, and basically anything else in the literary world over at Quirky Cat's Fat Stacks (of Books). ✧I review comics and books, as well as write content for Word of the Nerd. ✧I review comics for Monkeys Fighting Robots. ✧I write content for Screen Rant and CBR. ✧I write book reviews for The Review Crew.
View all posts by Liz (AKA Cat) →
This entry was posted in Fantasy, Uncategorized, Urban Fantasy and tagged Book, Book Review, Books, Fantasy, Literary, Literature, Review, Urban Fantasy. Bookmark the permalink.