Nightblade’s Vengence (Blades of the Fallen #1) by Ryan Kirk 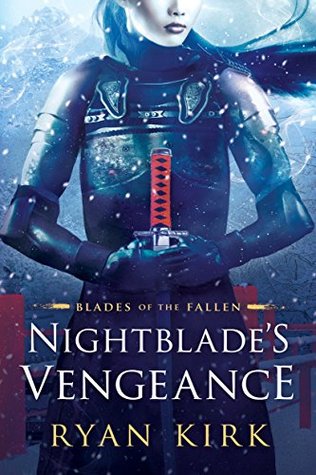 I received a free copy of Nightblade’s Vengence as I won the Goodreads Giveaway for this novel, I don’t have to leave a review, but I am choosing to do so.

Nightblade’s Vengence is the first in a new series about the Nightblades by Ryan Kirk. This new series does a wonderful job of explaining the backstory in such a way where new fans (like me) can start off here without having read the older series (though I’m sure they would add extra depth and understanding to the series).

I mentioned above that I haven’t read any of the other Nightblade books, nor have I read anything else by Ryan Kirk. Needless to say I wasn’t really sure what to expect. I knew the series would be about warrior and vengeance, that much is obvious just based off the cover and title, but beyond that? I’ll admit I was a little concerned that the concept was going to be an overused or overplayed one, but Kirk manage to spin this in such a way where it felt like a new idea, and I found myself really enjoying it.

Admittedly there’s a bit of a slow start to the series, and there are a couple of lulls throughout as well. I found that once I hit the fifty percent mark things really started moving more smoothly, and by that point I was hooked. So if you find yourself debating on whether or not to finish this novel, try and hold out until the halfway point before you make a final decision.

I imagine most of the questions I have about the Nightblades would be answered in Kirk’s other series (such as more specifics on their abilities and training), and the basics for our warriors are covered, so really my curiosity is showing my interest more than anything.  I do think I’ll go back and read the other series sometime, I would love to see more about the Nightblade political structure, training techniques, ability variance and range, and so on.

Some of the characters took me a while to like, while others were instantly appealing for me. I wanted to like Asa from the start (I got the impression she was an important character, plus being the only female perspective drew me to her), but it took me a while to actually care about her and her goals. I’ll admit I never did agree with a lot of the choices she made, but I still respect her as a character, more so because she’s so flawed and human. I instantly liked Kiyoshi and Daisuke, though I knew there was more to both characters than they were willing to let on (which considering they’re both being portrayed as wise characters makes sense). Meanwhile I felt that Minori was seriously outclassed and thought more of his intelligence than he should (again, I believe we were supposed to believe that – he made a perfect foil for Kiyoshi).

I’ll admit that I felt some frustration at times about Asa’s character. I understand that not every character can be incredibly skilled in battle and such, and I appreciate that her character wasn’t overpowered. That being said, all the other fighters introduced are better than her, as even she acknowledges. This would have been easily overlooked (as Asa’s only goal is to avenge her father, not become the best) had she not been the only female we’re introduced to. Additionally Asa’s attractiveness comes up frequently – with some of the characters going so far as to tell us that most female Nightblade’s look more homely because they don’t concern themselves with their looks (or basic grooming habits; hair brushing was brought up). So I’m a bit disappointed with this focus for Asa, as I feel like she deserved better.

I do think the series would have benefited from some stronger character development. I know that Asa learned a lot during her time in this novel, but it all seemed so sudden and with few reasons given for her to actually change her mind. Additionally I would have liked to see more character reactions for the consequences of their actions (Minori’s for example).

On the whole this was a quick and interesting read, and one I mostly enjoyed. I’ll be curious to see what Kirk comes out with next.

I am an avid animal lover, photographer, graphic designer, and much more. I love to create art, and am willing to try any artistic technique at least once. I am particularly fond of artworks involving a lot of emotion and color. The purpose of my blog is for me to be open and honest with myself and the world about my attempts to grow as an artist. My other major passion is reading. My TBR pile is larger than I'll ever be able to read, and yet I can't resist adding to it on a nearly daily basis. I love to read science fiction & fantasy, graphic novels, and pretty much anything I can get my hands on. I have a couple of blogs, as you can see. One is primarily my photography, while the other are my book reviews. If you have any questions, feel free to reach out!
View all posts by Liz (AKA Cat) →
This entry was posted in Fantasy, Uncategorized and tagged Book, Book Review, Books, Fantasy, Literary, Literature, Review. Bookmark the permalink.