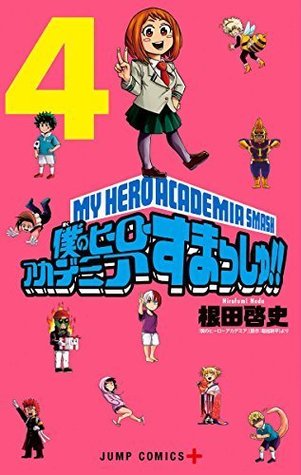 Likewise, if you don’t want to see MHA without it’s more serious edge…this probably isn’t the series for you. It’s a little bit quirky, and a whole lot crazy. Not exactly the series that caught our attention, to put it mildly.

My Hero Academia: Smash!! Vol. 4 is the latest parody volume to hit the shelves, and you can tell that it had a lot of fun here. Though I feel like this latest volume got even further away from the original plot arcs and just had some fun. For the record, I don’t actually think that’s a bad thing.

It’s hard to take a serious arc and turn it into something silly and crazy without losing something. The last volume showed us that. So I’m glad that this volume had a bit of a looser format. At least, that was how it felt to me.

There are still plenty of jokes to be found, and like the rest of the series, you really have to be a fan of MHA in order to understand even half of them. But it’s all in good fun, and it’s a nice way of relaxing after watching some of the crazier things occur in the main series.

I am an avid animal lover, photographer, reader, and much more. While my photography blog is feeling a bit neglected at the moment, the other sites I'm involved in are going strong. ✧I review books, comics, and basically anything else in the literary world over at Quirky Cat's Fat Stacks (of Books). ✧I review comics and books, as well as write content for Word of the Nerd. ✧I review comics for Monkeys Fighting Robots. ✧I write content for Screen Rant and CBR. ✧I write book reviews for The Review Crew.
View all posts by Liz (AKA Cat) →
This entry was posted in Comics, Manga, Uncategorized and tagged Book, Book Review, Books, Comic, Comic Books, Fiction, Graphic Novels, Hirofumi Neda, Humor, Kohei Horikoshi, Literature, Manga, MHA, My Hero Academia, My Hero Academia Smash!, My Hero Academia: Smash! Vol. 4, Review, VIZ Media. Bookmark the permalink.