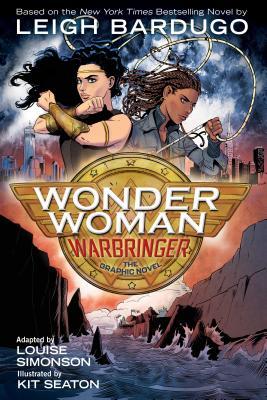 I received a copy of Wonder Woman: Warbringer through NetGalley in exchange for a fair and honest review.

Odds are pretty good that you’ve heard of Leigh Bardugo’s novel, Wonder Woman: Warbringer. Set in the DC universe, it followed Princess Diana in her early years. It’s part of a series that DC has been working on lately, and it’s been getting a lot of ink.

This is not that novel. But it’s close. This is the graphic novel adaptation of the book. And really, it was just a matter of time before that happened: DC is known for their comics, after all. As such, this graphic novel is perfect for fans of that novel. Or for new fans that never had time to read it in the first place – don’t worry, we won’t judge! Just go ahead and enjoy it.

Back when Diana was still with the Amazons, she desperately longed to be able to prove her worth to them. She didn’t want to just be known as her mother’s daughter. She wanted to make a name for herself. And to prove that she belonged amongst them.

Then one day an unexpected change occurred in her life. She risked her life to save Alia, a girl drowning in the barrier around the Amazons. But Alia is not an ordinary girl, and in order for Diana to make it right, she must set out on an even bigger adventure than she ever imagined.

I really enjoyed seeing Diana at a younger point in her life. Her series may be a long-running one, but this is a side of Diana that we don’t get to see too often. So you better believe that I appreciated every moment in this novel.

The whole Warbringer plot was actually quite fascinating. I love how Bardugo was able to weave such a classic bit of lore into something that fits into a Wonder Woman story. I know that this is basically how Wonder Woman works, but I was still impressed with how it was handled here.

There are plenty of twists and turns to appreciate in both the novel and graphic novel version of this tale. Speaking of, I think they did a pretty solid job of porting the entire plot over. Did it lose some detail? Of course, it did. But that’s to be expected with any adaptation. I really do think that Louise Simonson did a decent job of condensing Leigh Bardugo’s novel into this new format.

The artwork behind Wonder Woman: Warbringer was an interesting touch. I loved the stylistic choices that Kit Seaton made in making this graphic novel. It all still read as Diana – but it also was clearly targeting a slightly younger audience. And I sincerely hope that it worked.

Part of me is almost sad that this is one concise graphic novel, instead of an entire series. But as far as complaints go, that’s actually pretty minor. Though I would love to see Leigh Bardugo take over writing for Wonder Woman at some point…