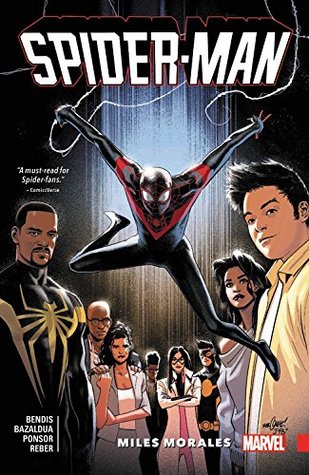 This is the fourth and final volume of Miles Morales, as written by Brian Michael Bendis. Since I’m behind on reading this, I already know that his series get picked up again (confession: I’ve been reading the new issue as they come out, even though I hadn’t finished his backlog yet).

Spider-Man: Miles Morales Vol. 4 seems to be divided among the fans. Some people loved it, while others…not so much. Personally? There were elements in this volume that I absolutely loved (and I’ll cover them later). And admittedly there were elements that I didn’t love quite as much.

This volume brings Miles Morales up against the Sinister Six (not by name, but in essence), some family issues he thought he was past, and some troubles from the friendship department as well. But Miles did a pretty solid job of taking it all in stride. Well, all things considered.

Spider-Man: Miles Morales Vol. 4 had a whole lot going on, even though it was the standard number of issues. Perhaps because Brian Michael Bendis knew he was wrapping it all up? I’m not sure. All I know is that I don’t envy Miles for everything he had to juggle here.

Granted, it seems like Miles is always dealing with threats from all sides. I’m guessing that just comes with the Spider-Man mantle, because it seemed to be Peter Parker’s luck as well. On the bright side, Miles did get one of his friends to come back into the picture, and there were other wins in his life as well.

The Sinister Six threat was decent, on the whole. I’m not sure I would have enjoyed it so much without adding Bombshell’s mom into the mix. That woman is stone cold. My only regret is that she and Sandman didn’t come to blows. Because for a minute there I really thought might. But seriously, her character is one that you’ll love to hate.

Goldballs came back, which I was super thrilled about. I kind of hated how they just had him walk away. I know he’s not a major character for this series, but he does help fill out the friendship corner for Miles.

Speaking of friends, that whole plot with Ganke? Yikes! I know that it’s supposedly wrapped up, but it does not feel that way to me. I keep expecting some crazy twist to suddenly appear from that side of things. Can you blame me?

And finally, the last cameo to show up in this volume. It was unexpected, but probably more so for Miles than for me. I did enjoy seeing how Miles (and his family) handled it though. It gave all three of them a chance to show how they handle a situation like that (and the answer is VERY differently from one another).

On the whole, this was a decent issue. It still feels like there’s a lot of stuff to get wrapped up, and so it didn’t really feel like a final volume. But at least Miles’ story got picked up again, and has continued on.

I am an avid animal lover, photographer, graphic designer, and much more. I love to create art, and am willing to try any artistic technique at least once. I am particularly fond of artworks involving a lot of emotion and color. The purpose of my blog is for me to be open and honest with myself and the world about my attempts to grow as an artist. My other major passion is reading. My TBR pile is larger than I'll ever be able to read, and yet I can't resist adding to it on a nearly daily basis. I love to read science fiction & fantasy, graphic novels, and pretty much anything I can get my hands on. I have a couple of blogs, as you can see. One is primarily my photography, while the other are my book reviews. If you have any questions, feel free to reach out!
View all posts by Liz (AKA Cat) →
This entry was posted in Comics, Graphic Novels, Marvel, Uncategorized and tagged Book, Book Love, Book Review, Books, Comic, Comic Books, Comic Review, Fantasy, Graphic Novels, Literature, Marvel, Marvel Comics, Marvel Review, Miles Morales, Review, Spider-Man, Spider-Man: Miles Morales, Spider-Man: Miles Morales Vol. 4. Bookmark the permalink.