Review: White Claw Vol. 1: The Egg of the Dragon Queen 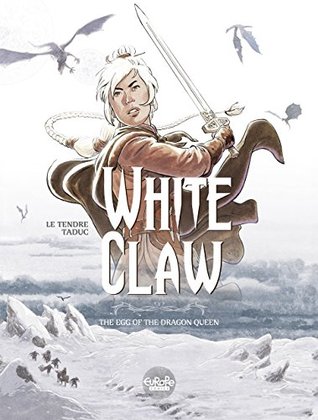 I received a copy of White Claw Vol. 1 through NetGalley in exchange for a fair and honest review.

I was immediately drawn to White Claw Vol. 1 thanks to the striking cover it had. I loved the white on white elements shown, as well as the art style in general. From there the description really captured my attention. A dragon queen, a poacher, and an attempt to save all their people? It sounds perfect.

I was so excited for this graphic novel when I saw it. Between the art style and the description it left me anticipating something like Dragon Heart. Not in plot, of course, but in the tone and feeling. I didn’t quite get what I was hoping for, but that’s probably my fault.

I feel like this graphic novel had so much potential. Maybe that’s why I was ultimately left feeling a little let down by it? There was an interesting plot to be had here – it just got a little muddy during points. The characters had potential – they just needed better introductions and maybe a little strengthening. Any one of those issues would probably have been fine on their own, but when combined it left the series feeling somewhat lackluster.

That’s not to say that there wasn’t interesting points in this graphic novel. There were points where I really did find myself invested in what I was reading. It just wasn’t a consistent feeling. I think the best way I could put it is to say that it felt like I was reading two or three graphic novels at the same time, rather than one cohesive thought.

I’ll be curious to see if there will be a second volume or not, and if so if they’ll resolve some of these issues. The artwork really was quite beautiful, and for that alone I’d be tempted to give any sequel another chance.

I am an avid animal lover, photographer, reader, and much more. While my photography blog is feeling a bit neglected at the moment, the other sites I'm involved in are going strong. ✧I review books, comics, and basically anything else in the literary world over at Quirky Cat's Fat Stacks (of Books). ✧I review comics and books, as well as write content for Word of the Nerd. ✧I review comics for Monkeys Fighting Robots. ✧I write content for Screen Rant and CBR. ✧I write book reviews for The Review Crew.
View all posts by Liz (AKA Cat) →
This entry was posted in Graphic Novels, Uncategorized and tagged Book, Book Review, Books, Comic, Comic Books, Europe Comics, Fantasy, Fiction, Graphic Novels, Literature, Review, White Claw. Bookmark the permalink.