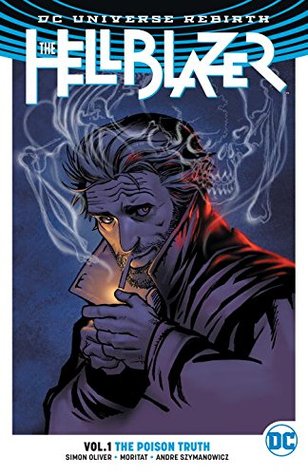 Slowly but surely I’m getting caught up on all (well, most) of the DC Rebirth series. I’m currently working on Hellblazer, in case that wasn’t blatantly obvious. Admittedly I haven’t made it through the New 52 run of this series, so I may or may not be missing out on some backstory. But I really wanted to finally get going.

John Constantine. What a character. He’s one that many love to hate, while others hate to love him. Honestly, he’s one of those characters where you can easily form your own opinion on him, and find proof to support almost any theory. I think that’s why I like him. He’s not inherently good, bad, nice, mean, or anything in between. He just is.

I have read and seen a few different takes of Constantine. They all had interesting points and they certainly all had flaws. But I’ve seen enough to know that I needed to go into this with an open mind; not all of the characters shown were going to be represented the way I expected them to, and I just had to accept that fact.

The Poison Truth starts out with a bang, but considering this is Constantine we’re talking about, I’m not really all that surprised. He’s got a real talent for getting in over his head, right? All of this volume revolves mostly around a few different plot points, leaving it feeling cohesive. My favorite type of volume collection!

Apparently sometime in the not so distant past Constantine managed to get his butt banned from London – what a shock. Not a legal ban or course. That’s far too banal for him. It was a magical one, and being Constantine he’s willing to risk everything to undo that.

I’m bringing that bit up because it’s so painfully accurate to the Constantine I know and love that it isn’t even funny. This is the sort of Hellblazer I was hoping for, and I got it. What I wasn’t expecting was one particular cameo. Actually, he’s more than a cameo – he appears again and again, becoming a relatively large plot point. And no, I’m not talking about Chaz (I expected to see him).

This collection had its ups and its downs, of course, but on the whole I really enjoyed it. There are some new characters I hadn’t previously met, and the time spent on developing them seems like it was worth it so far. The cameo was fascinating, fun, and it made sense. Constantine acted just like I expected, and of course there’s the antagonist. About the right threat level, if you ask me. Big enough to force Constantine to care (you know, once he figures out what’s going on), but not so insanely huge that it won’t eventually get solved.

I’m looking forward to starting the second volume of Hellblazer. Luckily for me I already picked it up, so I don’t have to wait long (unless you count the other books that are on my list before it).

I am an avid animal lover, photographer, reader, and much more. While my photography blog is feeling a bit neglected at the moment, the other sites I'm involved in are going strong. ✧I review books, comics, and basically anything else in the literary world over at Quirky Cat's Fat Stacks (of Books). ✧I review comics and books, as well as write content for Word of the Nerd. ✧I review comics for Monkeys Fighting Robots. ✧I write content for Screen Rant and CBR. ✧I write book reviews for The Review Crew.
View all posts by Liz (AKA Cat) →
This entry was posted in Comics, DC Comics, Graphic Novels, Uncategorized and tagged Book, Book Review, Books, Comic, Comic Books, DC Comics, Fiction, Graphic Novels, Literature, Review. Bookmark the permalink.