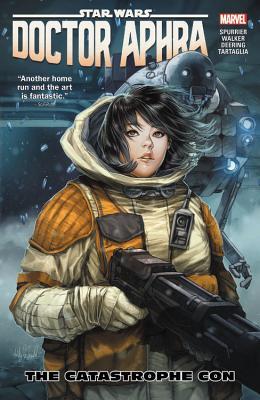 The Catastrophe Con continues the epic story of Doctor Aphra. The last volume introduced a love interest of sorts for Aphra, and I’d be lying if I said I wasn’t anxious to see what was going to happen next for them.

Doctor Aphra is by far one of my favorite Star Wars series right now. Granted, I haven’t been doing a great job of staying up to date with the others…but I suppose the fact that I’ve been making an active effort to stay up with hers should say something.

I have to say. I think this volume has got to be the darkest of Doctor Aphra’s series yet. Maybe it just feels that way now…but I don’t think so. I hadn’t anticipated even half of all the twists that occurred here, and several of them were really emotional.

This was a whirlwind of a volume. Something crazy would happen, followed immediately by something else, and then something else. It was intense. But in a good way, for the most part at least.

It feels like everything that Aphra had done in previous volumes is coming back around to bite her. I think we all knew it would catch up to her one day. She was probably just hoping that it wouldn’t happen all at once.

While this was undoubtedly a very intense and nerve-racking volume, there were still some oddly funny moments in it as well. How Alpha was able to blackmail a certain lover (can we call her that? I’m not sure) to get her to show up for example. That had me giggling. It was SO Aphra. Plus, it wasn’t a bad way to ensure that she showed up. I mean, it didn’t work out great for anybody in the long run, but at least Aphra tried?

I’ll admit that I was a bit confused at the beginning of this issue. The artwork on the cover is slightly different, resulting in Aphra looking slightly less like herself than normal. So combined with her going by another name…and I quickly was questioning if they were following another character that would somehow end up relevant later. A few panels quickly dissolved those concerns, but it did take me a moment.

I’m honestly not sure how I feel about the resolution of this plot. There were two larger moments in it, relatively speaking. Both were…intense. I honestly can’t say more than that, because I don’t want to spoil them. I will say that I think I need some time to recuperate. Maybe I wouldn’t be feeling that way if the volume hadn’t ended the way it did though. But cliffhangers are a great way to force us to buy the next volume, so it is what it is.

I’m conflicted about having to wait for the next volume. On the one hand, I really want to see what happens next, and on the other, I’m happy for a bit of a respite. Yes, the volume was that emotionally tolling for me. Maybe I was just feeling a little bit emotionally vulnerable when I read it though. Hard to say for sure. I do know that I’ll end up reading the next volume when it comes out though, so there’s that.

I am an avid animal lover, photographer, reader, and much more. While my photography blog is feeling a bit neglected at the moment, the other sites I'm involved in are going strong. ✧I review books, comics, and basically anything else in the literary world over at Quirky Cat's Fat Stacks (of Books). ✧I review comics and books, as well as write content for Word of the Nerd. ✧I review comics for Monkeys Fighting Robots. ✧I write content for Screen Rant and CBR. ✧I write book reviews for The Review Crew.
View all posts by Liz (AKA Cat) →
This entry was posted in Comics, Graphic Novels, Marvel, Uncategorized and tagged Book, Book Review, Books, Comic, Comic Books, Doctor Aphra, Doctor Aphra Vol. 4, Doctor Aphra Vol. 4 The Catastrophe Con, Graphic Novels, Literature, Marvel, Marvel Comics, Review. Bookmark the permalink.