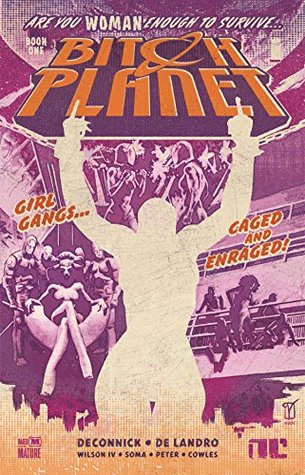 This series has been on my TBR list for way too long, so I’m really happy that I finally made it around to reading it (well, the first volume at least. Baby steps!). The series is by Kelly Sue DeConnick (whom I will forever love for her work on Captain Marvel) and Taki Soma (the artist that gave this series its iconic look).

Bitch Planet is set in a not too distant future, where patriarchy has gone to the extreme end of things. Women who do not comply are sent to a prison planet (known as ‘bitch planet’) where they will never have a chance to come home. The list of things considered noncompliance for a woman is terrifying, and it makes you wish that this is a world we’ll never end up seeing.

Having read this series I have to say that I think fans of the Handmaid’s Tale would like this series – especially if they’re looking for something with more of a sci-fi twist on it. And yes, I really do think this series is intense enough to deserve that comparison. It’s beautifully written, but intense.

Warnings first: In a series like this you can probably expect some of the warnings I’m about to give. There’s a lot of controlling behavior shown, comments on women’s looks and weight (yes, that is one of the compliance issues), men having affairs with the women being punished for it, and outright abuse. It can get pretty rough at times.

When I finished reading Bitch Planet Vol. 1 I honestly just sat there, staring out into nothing for about a half hour. I’m not sure if it was the world itself, the plot, or the conclusion, or maybe a combination of all three, but it left me emotionally stunned. It hit me in ways I couldn’t have predicted or prepared for. For what it’s worth, I honestly believe that’s a good thing, but I did need a little bit of time to recover!

Whenever I read a series that tends to border on the dystopian side I try really hard to prevent myself from getting attached to the characters. You just never know what’s going to happen to them. I tried that here, but I completely failed. I can’t say that I grew attached to all of the characters, but there were three or four I was fond of by the end.

That made seeing them in this situation so much worse. I wanted to see these women succeeding, not getting beat down – in a literal sense sometimes. A couple of the characters I was fond of before they took the time to tell us their back stories, others I needed their life story in order to feel more connected. It was a good call to let us get to know so many of the characters, even if it did break my heart a little bit.

This series is intense. I honestly can’t say that enough, or put it more bluntly than that. The world these characters live in is not a good one. I think most of us would like to believe that it’s a world that we’ll never see – one that couldn’t ever be possible. But hey, you never know, right? That’s the whole point of the series. To show us the sliding slope of these things. To make us aware of just how bad it could get.

I’m both looking forward to and dreading the next volume. I know that it will be brilliant, but I also know that I’m emotionally invested now. I may take a bit of time before I go and read it…but I will get to it!

I am an avid animal lover, photographer, graphic designer, and much more. I love to create art, and am willing to try any artistic technique at least once. I am particularly fond of artworks involving a lot of emotion and color. The purpose of my blog is for me to be open and honest with myself and the world about my attempts to grow as an artist. My other major passion is reading. My TBR pile is larger than I'll ever be able to read, and yet I can't resist adding to it on a nearly daily basis. I love to read science fiction & fantasy, graphic novels, and pretty much anything I can get my hands on. I have a couple of blogs, as you can see. One is primarily my photography, while the other are my book reviews. If you have any questions, feel free to reach out!
View all posts by Liz (AKA Cat) →
This entry was posted in Graphic Novels, Image Comics, Uncategorized and tagged Bitch Planet, Bitch Planet Vol. 1, Book, Book Review, Books, Comic, Comic Books, Graphic Novels, Image Comics, Literature, Review. Bookmark the permalink.