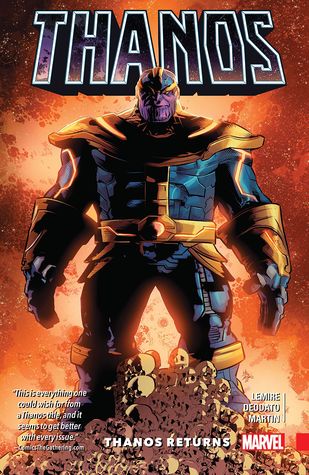 I read Thanos Vol. 1 in single issues through Marvel Unlimited.

To be completely honest here, I had been kind of going back and forth for a while on whether or not I wanted to read the Thanos series. I mean, yeah I was curious, but I wasn’t sure if it was enough. There are two things that ended up making me decide to give it a try though. The first is that I realized that these events will probably end up tying into the Infinity War plot (I’m only assuming here, but it seems reasonable) and thus it might get referenced quite a bit. The second is that I learned that one of my favorite comic book writers, Christopher Hastings, helped out here and there with the plot. I think he mostly helped out with the third volume, but I don’t like jumping into plots like that.

Now that I’ve actually read the first volume of Thanos, I can see how it fits into the bigger picture of the events happening in Marvel. It certainly ties in with the Infinity Countdown events, and therefore will likely tie into the war itself. So I’m really happy I took the time to start reading this.

Along with tying into those current and future events, it ties into a pretty major one of the past too. Remember when Thanos (along with Nova) got trapped in the Cancerverse? Well, we’re quite literally seeing the ramifications of that. Having been a huge fan of that plot, I’m really happy to see this come back around.

How many times can they create a series about Thanos and still have it be interesting? The answer, in this case, is at least one more time. I’m not saying that this series is perfect, but it’s certainly been interesting so far. I love all the connections it has to other series; though thankfully most of them are subtle enough where I don’t think it’d drive a newcomer crazy, or make them feel like they’re missing out.

Have you ever wanted to see Thanos in a truly weakened state? Where he’s taken to his knees? Then this is probably the perfect series for you. In this series, there are a lot of things going against Thanos. For one, Lady Death, his on again off again lover, has turned her back on him. That alone is fascinating to me (though I suppose in the most recent continuity maybe they never were lovers? This can get complicated).

More though, is the fact that Thanos is dying. The Cancerverse is not a good place to be trapped, and I think the reasons are fairly obvious for that. We know that Nova managed to escape, but he came out pretty messed up. As it turns out, Thanos also got messed up by the experience, just in a completely different way.

I never thought I’d find a series where Thanos is desperately trying to find a way to live interesting, but that’s happening now. It isn’t just his attempts, but everything and everyone reacting to what is happening. When major players like the Shi’ar Empire find out about Thanos being weakened, of course they’re going to make a move. It’s only logical, after all. But man was it interesting to read. I hope we can see more people moving in against him, even (or maybe especially) after the conclusion of this volume.

I am an avid animal lover, photographer, graphic designer, and much more. I love to create art, and am willing to try any artistic technique at least once. I am particularly fond of artworks involving a lot of emotion and color. The purpose of my blog is for me to be open and honest with myself and the world about my attempts to grow as an artist. My other major passion is reading. My TBR pile is larger than I'll ever be able to read, and yet I can't resist adding to it on a nearly daily basis. I love to read science fiction & fantasy, graphic novels, and pretty much anything I can get my hands on. I have a couple of blogs, as you can see. One is primarily my photography, while the other are my book reviews. If you have any questions, feel free to reach out!
View all posts by Liz (AKA Cat) →
This entry was posted in Comics, Graphic Novels, Marvel, Uncategorized and tagged Book, Book Review, Books, Comic, Comic Books, Fiction, Graphic Novel, Literary, Literature, Marvel, Marvel Comics, Review, Thanos, Thanos Vol. 1. Bookmark the permalink.