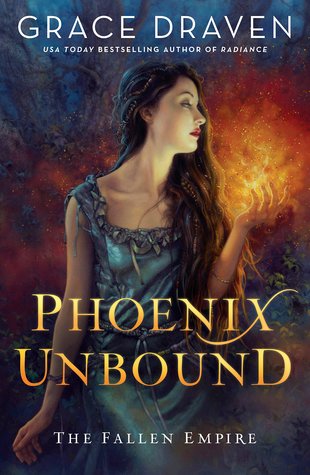 I received a copy of Phoenix Unbound through NetGalley in exchange for a fair and honest review.

Phoenix Unbound is the first book in Grace Draven’s new series, the Fallen Empire. Grace Draven is no stranger to writing epic tales of fantasy, so I had little doubt that this one would be outstanding as well.

Back when I was scrolling through the fantasy category on NetGalley, I couldn’t help but have the cover for Phoenix Unbound catch my attention. It’s so striking and beautifully done, how could it not? I love the bolder colors and the bright elegant title scrolling across the cover. Once I read the description I was sold. I knew I had to read this one.

Warnings first: There is a lot of trauma in this book. Both main characters have been through hell and back. Both have been slaves, one bound by chains and the other guilt and family. There are a lot of references and details to torture, burning at the stake, and rape. It gets very rough at times, but it is also very relevant to the plot, so it’s hard to avoid. I’d say that it starts out with the worst of it, and gradually gets less intense.

Phoenix Unbound was a whirlwind of a read. It was emotionally compelling and incredibly well written. I’ll confess that at the beginning I very nearly put the book down – it was very heavy at points and I found it to be fairly intimidating. However I persevered and I’m very glad I did so.

I love reading books where they use a different interpretation of the most basic types of magic. In this case you can probably guess that it would be fire. Gilene’s magic isn’t freely given or used, but she uses it to the best effect she can. I loved the idea of the Agne, as well as the culture and religion that was formed about the fire users. I would absolutely love to know more about the magic and its origins (specifically why Gilene’s village had magic).

I loved Gilene’s character. That her magic had a cost didn’t seem to slow her down at all – it never once made her stop doing what was right, even when she full well knew the consequences of her actions. It became impossible not to root for her and her happiness.

Azarion’s character was significantly more complicated. I started out hating him, though acknowledging that the circumstances he was in limited his choices in life. Over the course of the book his character arc allowed for significant growth, and eventually I did find myself like his character as well. Once we were really given the chance to see who he was, as opposed to what the Empire had made him, that is.

While this was a really tough read at times, I have to give Grace Draven so much credit for what she did here. Both main characters were victims of rape, and that’s something she never shied away from once. Sexual assault and the mental ramifications of it is something not talked about enough, and that Draven not only did that, but in the context of both male and female victims was a shocking, but much appreciated move. The truth of the matter is that even the strongest of people can be victims, and this book did a wonderful job of showing us that.

I’m anxiously awaiting the next book in this series to drop. In the meantime I may go through the rest of Grace Draven’s backlog. Clearly I’ve been missing out.

I am an avid animal lover, photographer, graphic designer, and much more. I love to create art, and am willing to try any artistic technique at least once. I am particularly fond of artworks involving a lot of emotion and color. The purpose of my blog is for me to be open and honest with myself and the world about my attempts to grow as an artist. My other major passion is reading. My TBR pile is larger than I'll ever be able to read, and yet I can't resist adding to it on a nearly daily basis. I love to read science fiction & fantasy, graphic novels, and pretty much anything I can get my hands on. I have a couple of blogs, as you can see. One is primarily my photography, while the other are my book reviews. If you have any questions, feel free to reach out!
View all posts by Liz (AKA Cat) →
This entry was posted in Ace, Fantasy, Uncategorized and tagged Ace Publishing, Book, Book Love, Book Review, Books, Epic Fantasy, Fallen Empire, Fallen Empire #1, Fantasy, Fiction, Grace Draven, Literature, Phoenix Unbound. Bookmark the permalink.