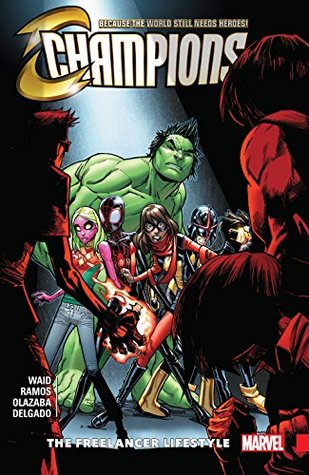 It’s time for round two of the Champions. I really like the team they’ve built so far, though I know they’ll be adding to it with time. At the start of this volume we have Ms. Marvel (Kamala Khan, that is), Spider-Man (Miles Morale), Nova (the kid), Hulk (Amadeus Cho), Viv (Vision’s daughter), and Scott Lang (the kid, sent from the past). They balance each other out pretty well, both in regards to their strengths and weaknesses as well as their personalities.

The problem with smaller team-ups like the Champions is that they sometimes get the short end of the stick. That means that sometimes when there’s a major plot going on in the universe they get dragged in and out and all over the place. Like what happened with Civil War II – most of them were wrapped up in it individually, so they didn’t bother giving much context when it crossed over into the Champions plot as well. So if you don’t follow the main continuity you miss out.

That happens in this volume as well, sadly. It’s pulling from multiple events and storylines, but mostly from Secret Empire. I haven’t actually read the main event for it yet, but I’ve read some of the series leading up to it, so I have some idea of what happens. Still, I did find myself lost/irritated at times, so consider yourself warned (especially if you don’t know any of the events that happen in Secret Empire).

This volume was a little bit all over the place, to be completely honest. In total there are three main plots, though they’re also fragmented, so you could consider it more than three depending on how you want to count it. It left the volume feeling disorganized, and left readers (at least it left me) feeling like I missed out on a lot by not following certain other continuities.

The first three issues focus on the Freelancers. These guys are the natural counter to the Champions. Everything the Champions stand for the Freelancers laugh at, and vice versa. They try a little hard to make the Freelancers edgy and dark, when really they’re just a bunch of greedy punks. You could totally say that the tree issues/plots are tied together, but even after reading them back-to-back they didn’t really feel like one cohesive plot.

The next plot is more Viv focused. She basically goes off on her own (thanks to her dad smothering her slightly – which in Vision terms is actually quite a bit of smothering). She made a new friend in the process though, and that friend may or may not end up being a Champion herself. I guess only time will tell with that one.

The last three issues are all Secret Empire tie-ins. Again, all three really have their own individual plots, so don’t expecting something larger or more consistent. I will say that the first of this set is the best – they take a lot of risks with this one, with direct references to Internment camps and a lot of other really heavy points.

The second Secret Empire telling is pretty heavy. I’m also pretty sure it ties in with Doctor Strange Damnation, though this probably comes before that. They’re searching for survivors after a major attack. While they don’t actually show much…what is implied is pretty graphic. Without having read Secret Empire I can only get so much out of the context…

The last issue that’s called a Secret Empire tie-in didn’t really feel like one, to be honest. It focused on Scott, and was more or less about his concerns about control and all the issues he’s had with adjusting. It’s an okay story, but then again I’m not a crazy Scott fan either, so take that with a  grain of salt.

I still feel like this volume was all over the place, which really stinks. Especially when you consider the fact that the first volume also had this happen. If this keeps happening the Champions will never really get a chance to find their own grounding or plot. They can’t keep getting pulled into events like this. I know I for one will lose interest if that keeps happening, and I have the luxury of reading my comics (well, these ones at least) through Marvel Unlimited.

I am an avid animal lover, photographer, reader, and much more. While my photography blog is feeling a bit neglected at the moment, the other sites I'm involved in are going strong. ✧I review books, comics, and basically anything else in the literary world over at Quirky Cat's Fat Stacks (of Books). ✧I review comics and books, as well as write content for Word of the Nerd. ✧I review comics for Monkeys Fighting Robots. ✧I write content for Screen Rant and CBR. ✧I write book reviews for The Review Crew.
View all posts by Liz (AKA Cat) →
This entry was posted in Comics, Graphic Novels, Uncategorized and tagged Book, Books, Comic, Comic Books, Fiction, Graphic Novel, Literature, Review. Bookmark the permalink.