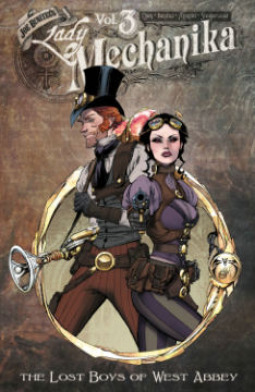 I received a copy of Lady Mechanika Vol. 4 through NetGalley in exchange for a fair and honest review.

About a year ago I had a friend suggest the Lady Mechanika series to me, and I’ve been so grateful ever since. Now we’re up to four volumes in the main plot, as well as one short story (Le Dama de la Muerte) to the series. It’s hard to believe it’s come so far so fast, but here we are!

There are a lot of reasons I enjoy the Lady Mechanika series, one of the reasons is probably pretty obviously. The Artwork is absolutely amazing. I’d say that this series probably has the best artwork out of all of the series I read (and if somebody knows work of this quality – please send me the name of a new series I can fall in love with!). I love the steampunk elements used in this series, and how much attention is giving to the details, something that is especially important in a believable steampunk series.

The one downside to this series is the length. Most of the volumes are pretty short, with this one being less than ninety pages. It would be nice to have more pages to immerse oneself into it, but really it is what it is. Each volume is more or less a standalone plot, with the main plot being an undercurrent that’s supplemented by the events occurring. That means that at least we’re not left with cliffhangers or anything annoying like that.

Also, quick side note. If you look at this volume in multiple locations you’ll find that the novel number changes from one to the other. I think this probably depends on if they’re counting the Le Dama de la Muerte to be number four or not, but I’m not entirely certain of it. All I know is that it’s listed as five on Goodreads and NetGalley, but only four on Amazon. The cover also says four, so take from that what you will.

If you’re enjoyed the previous few volumes of this series, then I can pretty much guarantee you’ll enjoy this one as well. The tone has been uniform throughout the series, as has the artwork (thank goodness – I don’t think I could survive a deviation from the style I’ve fallen so in love with). Lady Mechanika is still trying to track down her origins, though as always more current issues take the fore front of her adventures.

I absolutely loved the tone of this volume. I know that could probably be said for every volume, but this one in particular felt like they perfected what they were aiming for. They held to the same elements, while introducing yet another new set of characters, intrigue for our current members, and potential risks and danger. There wasn’t really that much advancement to the main plot, though we learned quite a lot about Mr. Lewis and his background, which was fantastic.

I’m looking forward to the next volume. Hopefully it’ll once again begin hinting at Lady Mechanika’s past and creation. They’ve been building up to it since the start, and who knows how long it’ll be before we ever learn the truth. Still, I hold out hopes each volume that we’ll get a hint or two (admittedly this volume was rather slim on that front).

I am an avid animal lover, photographer, reader, and much more. While my photography blog is feeling a bit neglected at the moment, the other sites I'm involved in are going strong. ✧I review books, comics, and basically anything else in the literary world over at Quirky Cat's Fat Stacks (of Books). ✧I review comics and books, as well as write content for Word of the Nerd. ✧I review comics for Monkeys Fighting Robots. ✧I write content for Screen Rant and CBR. ✧I write book reviews for The Review Crew.
View all posts by Liz (AKA Cat) →
This entry was posted in Comics, Graphic Novels, Uncategorized and tagged Book, Book Review, Books, Comic, Comic Books, Fiction, Graphic Novel, Literary, Literature, Review, Science Fiction. Bookmark the permalink.