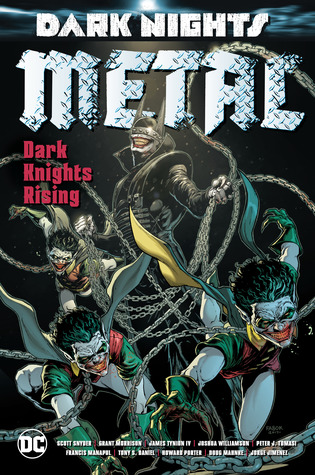 If you’ve been following the hype behind Dark Nights then you’ve surely heard of this series by now. It gives the short version of the origin stories behind the seven most iconic Batman alternates in the series. They’re beautifully drawn, creepy, and downright corrupt.

Before I had even had a chance to read the Dark Nights: Metal story I had heard about the Batman Who Laughs. At the time I was interested, but when I finally got to reading the series I was confused. The character played an important role, to be sure, but he wasn’t nearly as big as I expected. Then I learned that there was even more to it than that one series! Here is the origin story for these Batmans, and it’s here I learned why people really were going crazy for the guy (though in truth I mostly understood it based on his design alone).

As I said above, this volume includes the origin story of seven of the alternate Batmans. These ones are the most iconic ones shown (I believe there were many more than seven shown in the original series, but I also never took the time to count and be sure of that). Included are the Batman Who Laughs (obviously; he’s been driven mad by the Joker’s final toxin), The Drowned (my personal favorite, a female Batman who has modified her body to take on the power of the Atlanteans), The Red Death (a thief who went after the Flash), The Dawnbreaker (a Green Lantern who found a way around the rules), The Murder Machine (cyborg Batman), The Merciless (Batman with the helmet of Ares; one of the versions that loved and lost Diana), and The Devastator (Doomsday/Batman blend with a special hatred for Superman).

I’m sure we all have our own favorite evil Batman character, and there’s plenty to choose from. Personally while I did like the imagery used for the Batman Who Laughs, he wasn’t my favorite. I found myself most drawn to The Drowned and her story. For one thing she’s strikingly designed. For another I simply liked her way of speech and the trials she went through.

I was also surprisingly fond of The Dawnbreaker. I think because his origin story (up until a certain point) was the most similar to our beloved Bruce Wayne’s (the one from the primary universe that is). He lost his parents the same way, but instead found himself so determined that a Green Lantern ring found him. He then used his willpower to twist the ring to do his bidding, allowing him to break all the laws that the corps abides by. In a way it’s kind of fun to theorize about whether that would have happened in any other universe as well, or just the one.

I wasn’t a big fan of the final story included in this volume, Dark Knights Rising: The Wild Hunt #1. It felt silly in comparison, which was actually really jarring considering the disturbing nature of some of the backstories (did I mention that Batman Who Laughs came last, and therefore was literally right before this one? It was weird). I probably would have liked it more if not for that juxtaposition, but it is what it is.

I think this leaves me with only one Dark Metal plot left, not counting the series that are being affected by what has happened. I’m really glad I’ve taken the time to read and understand everything that’s happening though. I’m already seeing the effects of these plots seeping into other series, like Wonder Woman. I would probably be a lot more confused otherwise.

I am an avid animal lover, photographer, reader, and much more. While my photography blog is feeling a bit neglected at the moment, the other sites I'm involved in are going strong. ✧I review books, comics, and basically anything else in the literary world over at Quirky Cat's Fat Stacks (of Books). ✧I review comics and books, as well as write content for Word of the Nerd. ✧I review comics for Monkeys Fighting Robots. ✧I write content for Screen Rant and CBR. ✧I write book reviews for The Review Crew.
View all posts by Liz (AKA Cat) →
This entry was posted in Comics, Graphic Novels, Uncategorized and tagged Book, Book Review, Books, Graphic Novel, Literary, Review. Bookmark the permalink.