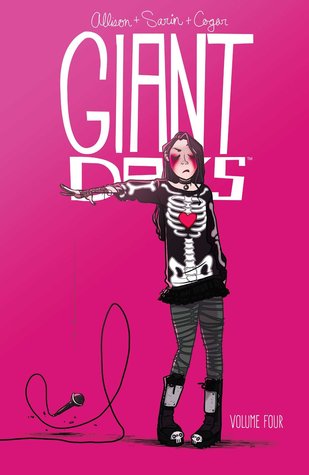 My binge reading of Giant Days continues, bringing me to volume four. I still absolutely adore this series; it’s so adorable and relaxing, while hanging onto everything that makes it funny. I love the absurd situations the characters can get into, despite the otherwise ordinary circumstances. I think I’m only halfway through the volumes at this point (not counting the Extra Credit volume that hasn’t released yet – at least not at the time I’m writing this) but I’m getting there! It looks like the series is pretty far ahead in issues over the volumes, so it’s nice to know that there will be even more soon too!

Do you ever start reading out a volume thinking you’ve got a pretty good idea of where it’s going next, only to be completely surprised? The type of volume (or book, or show) that starts off with things one way, and then has so many twists and turns that you’d never guess where things would end up? That’s pretty much this volume in a nutshell.

There’s so much going on in this volume, I’m not even sure where to start. I guess at the beginning works (let’s pretend that isn’t lazy). I’ll be honest; I didn’t love the first issue, where the girls teamed up to get Esther to come back to school. I think it’s the town she lives in that I don’t like; it’s so full of her past drama it’s almost suffocating. Granted, that was likely intentional, and in a way it’s a good thing, because it means that Esther will likely never settle for living there long term.

The next plot was a bit more interesting; with the end of the year coming up the girls realized that they needed to find housing for next year, and they needed to do it ASAP! Okay, Daisy already was fully aware of this, and had apparently talked their ears off to no avail until it suddenly struck the other two with extreme urgency, something I entirely believe.

That whole plot is probably really relatable to anybody that’s had to deal with the housing scramble that happens around campus (thankfully I was spared from that stress, so I found it more funny than memory-cringe-inducing).

I really enjoyed the movie plot for this issue, Esther got to be her ridiculous self, Suzie got to make fun of her, and Daisy got to have some fun and break out of her comfort zone. So really it was perfect for all of them. Plus it got them a tiny bit of money, so win-win, right? (Though we all know Esther is horrible at money management, and therefore it’ll be gone before the next volume, if not the next issue).

Most of the last issue is focused on Daisy. It isn’t a hundred percent on her, but it’s enough to make up for her getting brushed to the side a lot during volume three, so I’m content with how things went. I’m also curious to see if they end up following this plotline further – I have a feeling they will.

I’m still finding this a fun and lovably series. They’ve done a pretty decent job of balancing the focus between all of their characters. So far the main focus is still mostly on Esther, Suzie, and Daisy, with occasional forays into Ed and McGraw’s life. Nobody new was introduced this volume (well, that may not be true, but nobody that’s taken priority in the perspective yet at least), which I’m okay with. I think that will probably change, but I obviously have no proof of that.

I am an avid animal lover, photographer, reader, and much more. While my photography blog is feeling a bit neglected at the moment, the other sites I'm involved in are going strong. ✧I review books, comics, and basically anything else in the literary world over at Quirky Cat's Fat Stacks (of Books). ✧I review comics and books, as well as write content for Word of the Nerd. ✧I review comics for Monkeys Fighting Robots. ✧I write content for Screen Rant and CBR. ✧I write book reviews for The Review Crew.
View all posts by Liz (AKA Cat) →
This entry was posted in Comics, Graphic Novels, Uncategorized and tagged Book, Book Review, Books, Comic, Comic Review, Fiction, Graphic Novel, Literary, Literature, Review. Bookmark the permalink.