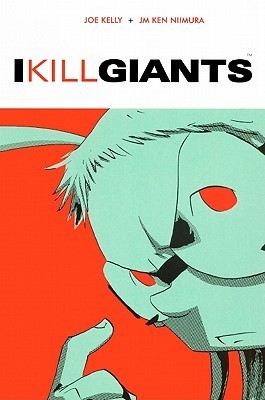 I’m going to be honest with you here; I had never heard of I Kill Giants before the movie came out (no, I haven’t seen the movie yet, but I really really want to). Naturally it piqued my interest and from there it was only a matter of time before I picked up a copy to read.

I Kill Giants was created by Joe Kelly (Spider-Man/Deadpool, JLA, Spider-Man, Deadpool, Heroes) and J.M. Ken Niimura (Gotham Academy, Henshin, Zero). It got called the ‘best Indy book of 2008’ by IGN, which just further increases my surprise for never having read it before. To be honest I really do wish I had heard about it sooner, but at better late than never, right?

Believe it or not I went into I Kill Giants without too many expectations. Sure, I had seen the movie trailer and everything, but I know better than to judge a book by its movie. Whatever I was expecting though, I was not prepared for what I got. This graphic novel surpasses the concept of a series full of battles and giants, instead telling us a deeply emotional story.

The main character, Barbara Thompson takes a little getting used to. She’s living in an imaginary world and she’s not ashamed of that fact. She’ll even get you to question what is real and what is simply her imagination. She’s got a razor sharp wit and she’s not afraid to use it. She’s brash and headstrong and doesn’t seem to care about the fact that she’s pushing people away.

But she’s also very much afraid. Of what is not so clear in the beginning. It’d be easy to assume it was the giants she’s hunting, but she keeps insisting that’s not the case. That she isn’t afraid of giants. This leads us to believe that something more is going on, something behind the scenes that we’re not allowed to witness. And that’s exactly right.

I Kill Giants is in truth one big metaphor. Barbara isn’t fighting giants, or more accurately she isn’t just fighting giants. She’s fighting nature and life as well. She’s fighting loss and fear and every other emotion that she’d rather just not deal with. This novel is all about her coming to terms with what is happening, and how she desperately needed a support structure to see the truth of it.

Don’t read this graphic novel if you’re not prepared to ugly cry. Because you will. Or at least I did. And I’m not ashamed to admit that either. This is a beautiful and heartbreaking tale. I know it’ll stick with me for years to come.

Admittedly I’m a bit nervous about watching the movie now. I don’t think I can handle this series beating me up twice in one month. Maybe I’ll wait until it’s on DVD to watch it. That’d probably be safest, right? That being said, I do actually hope the movie stays true to the graphic novel. I’d be extremely disappointed if it was anything else.