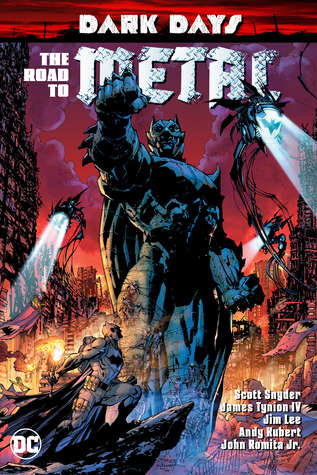 Dark Nights: Metal has been shaking the comic book industry for months, so naturally I knew I had to read it; if nothing else so that I could recognize its influence when I see it. Fans have been going crazy about this series, and I’ve been hearing snippets about it left and right. If you’ve somehow managed to avoid the Dark Nights hype than consider me impressed.

Think of Dark Nights: Metal as Batman taken off of his leash. The series has always felt like it wanted to have the ability to go darker (I mean, look at the obsession with the Joker, which should be telling enough) but here it finally gets to run around and be just as crazy and dark as it always dreamed of. It also dips very heavily into the multiverse, so fans of that will be pleased.

The whole focus of this series is in the name: metal. Or rather, specific metals. As it turns out there are metals that have been controlling the pattern of things, and slowly but surely Batman has been intentionally infected with all but one of them. And before you ask, no he wasn’t the one doing it. Somebody else was smart enough to figure out how to play Batman. That should really speak volumes in and of itself.

We have many favorites from DC getting together here in order to stop a greater threat. I don’t think they all truly understand what is at stake, but to be honest there were times where I could say the same for myself, so it’s all good. Superman and the rest of the Justice League are trying to do everything in their power to stop this world ending event (no exaggeration) while Batman is stubbornly insisting he can handle this himself…that actually sounds about on par for the course.

There are dozens of other cameos as well. In fact there are so many, from the obvious to the obscure that I’d miss some if I tried to list them all out. Let’s just say that both villains and heroes make appearances in this series.

Most of the hype (that I’ve heard) has revolved around the alternate Batmans shown in this series. If you haven’t heard about them I promise I won’t give anything away. Let’s just say that there are one or two of them that really steal the show. Seriously, I’m not sure whether Joker would proud or envious. I’m also not sure which emotion would be more dangerous for Joker to be feeling…

To be honest, while I really did enjoy this series, I do feel like I was let down a little bit by it. I think all the hype and talk raised my expectations to an unfair level. That obviously resulted in my slight disappointment in reading this. I still think it had a lot of great points, and I can see how it could influence DC writing for the better…but I also wish there had been more. Perhaps if they slowed down the pace a little bit; had taken more time to get through the story being told? That might have done it, but I’m not sure.

I am looking forward to see how this series ends up affecting the rest of the DC world. I’ve been hearing hints of this series or that series being influenced by the themes and topics of Dark Night. I hope they’re accurate and live up to the quality shown here.

I am an avid animal lover, photographer, reader, and much more. While my photography blog is feeling a bit neglected at the moment, the other sites I'm involved in are going strong. ✧I review books, comics, and basically anything else in the literary world over at Quirky Cat's Fat Stacks (of Books). ✧I review comics and books, as well as write content for Word of the Nerd. ✧I review comics for Monkeys Fighting Robots. ✧I write content for Screen Rant and CBR. ✧I write book reviews for The Review Crew.
View all posts by Liz (AKA Cat) →
This entry was posted in ARC, Comics, Fantasy, Graphic Novels, Uncategorized and tagged Book, Book Review, Books, Comic, Graphic Novel, Literature, Review. Bookmark the permalink.