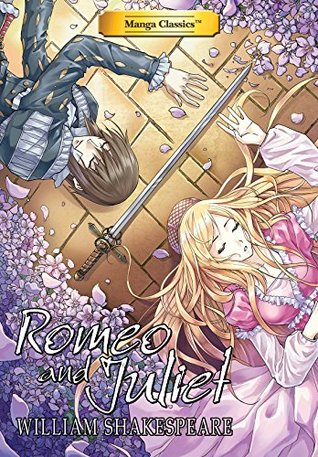 I received a copy of Manga Classics: Romeo and Juliet from NetGalley and Udon Publishing in exchange for a fair and honest review.

So on the off chance you haven’t heard me say this, and thus aren’t totally sick of me repeating myself, I’m going to say it again: I absolutely love the concept of Manga Classics. I love them for many reasons. It’s always fun to reread a classic, but even more so it’s very refreshing to read them in a new medium, such as this. Manga Classics condenses the larger classics into something less intimidating, which makes it great for both rereads and first time reading. I also believe that Manga Classics make the classics more approachable, which is something I greatly appreciate.

I’ve read Romeo and Juliet a time or two, not to mention I’ve seen the play itself and a couple of movie adaptations (which you’re welcome to pretend don’t exist if you’d like, I won’t judge you there) so it was really interesting for me to see the play in this form. The artwork was lovely, and I have to say I’m really impressed that they were able to make such a large cast of characters all look unique (though of course all main characters got an extra level of attention that makes them stand out). Not once did I find myself struggling to tell two characters apart. I’m really awful with names, but I’m decent with faces, so this was actually pretty fun for me. I feel like I got more out of this read because of it; I picked up on more details occurring in the backgrounds of scenes that I’ve likely overlooked in the past, simply because I had forgotten who so and so was or something like that.

Like any adaptation there’s a little bit of alterations that must be made, such as condensing some scenes, in the case of manga opting to let some scenes be shown instead of told. I don’t feel like we lost anything in the translation here, and I am very happy for it. I’ve read manga adaptations by Crystal S. Chan before, and she has never once let me down. I loved Julien Choy’s artwork, as you’ve already seen me gush about a little bit up above. I’m curious to see what will be adapted next. Part of me hopes they’ll do the twin to Romeo and Juliet and give us an adaptation of Midsummer’s Night Dream. That would be fantastic! But regardless, I’ll happily take whatever I am given.

I am an avid animal lover, photographer, reader, and much more. While my photography blog is feeling a bit neglected at the moment, the other sites I'm involved in are going strong. ✧I review books, comics, and basically anything else in the literary world over at Quirky Cat's Fat Stacks (of Books). ✧I review comics and books, as well as write content for Word of the Nerd. ✧I review comics for Monkeys Fighting Robots. ✧I write content for Screen Rant and CBR. ✧I write book reviews for The Review Crew.
View all posts by Liz (AKA Cat) →
This entry was posted in Graphic Novels, Manga, Uncategorized and tagged Book, Book Review, Books, Literary, Literature, Manga, Manga Review, Review. Bookmark the permalink.