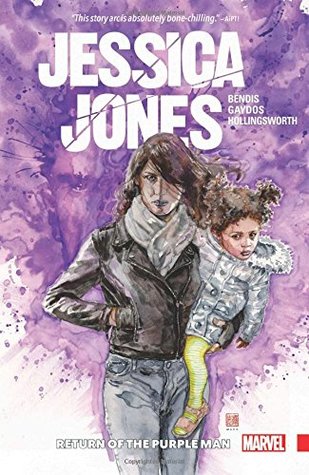 Return of the Purple Man is the third and final (I believe) volume in the latest run of Jessica Jones. While I am incredibly sad to see it go (it has been fantastic), I am happy with the note they chose to end everything on. It really only seems appropriate that they’d bring the Purple Man back in before another round of goodbyes.

That being said, I’m actually really hoping that this series gets rebooted along with the other series that Marvel is re-launching. I don’t want another origin story or anything like that; I just want to see more of Jessica Jones. I love her character, the interactions that she has (I love Captain Marvel so seeing her constantly pop up in the series is pretty cool), and the important dialogue this series has been known to start.

What would you expect from this series, knowing full well that the Purple Man is going to make an appearance? (The title sort of gives that bit away). I know I had expectations for this appearance, and I’ve got to say, I’m pretty happy with how things were handled in this story.

Jessica is in a wildly different place from the last time she went up against the Purple Man. She’s got a family now. She’s got stable friendships, people who would do anything for her. People who would absolutely notice if she went missing, and would tear apart the world looking for her.

Naturally that means this confrontation is going to go different. She’s got more support this time around, but that also means she has more to lose. I can’t be the only one that was really scared about what was going to happen to the baby, can I? Because I was really nervous for a while there.

Jessica made some really smart moves in dealing with him; though admittedly she never would have been able to do this without advance notice of his arrival. Still, I feel like this shows just how much her character has grown. Sure, she was absolutely willing (and expecting) to not make it out of the scenarios she put herself in, but as long as it resulted with her family (Luke and the baby) being safe, I sincerely think she would have been okay with it.

There were fewer cameos in this volume, on the whole, but the ones we got were pretty cool. Obviously Captain Marvel made an appearance – she’s an interesting person to call in to deal with Killgrave. One of those high risk/high reward scenarios. She’d be great against the Purple Man, unless he got her until his control, in which case she’d be a horrible weapon for him to have.

Nick Fury and a couple Agents of S.H.I.E.L.D. (and no, I don’t mean the ones from the movies) make appearances as well, which was another good move on Jessica’s part. I’m not saying that Nick would have an easy time against Killgrave, but the man does obsessively plan for everything, so I know I’d want him helping me out here.

I love how they handled the Luke Cage side of things – I don’t want to give it away, so let’s just say that they handled things in such a way where this was still mostly a Jessica versus Killgrave scenario. It was perfect. Though I would love to see Luke Cage beat the snot out of that man someday. One can only dream.

I’m sad this series has come to an end (again), but I’m really happy with the way they chose to go out. It was a fantastic and griping volume, and it really did fit in with the story they’ve been trying to tell us these last few volumes. I do hope that should Jessica Jones ever get brought back that we have the same creative team behind the wheels (Bendis and Gaydos are such a power team here).

I am an avid animal lover, photographer, graphic designer, and much more. I love to create art, and am willing to try any artistic technique at least once. I am particularly fond of artworks involving a lot of emotion and color. The purpose of my blog is for me to be open and honest with myself and the world about my attempts to grow as an artist. My other major passion is reading. My TBR pile is larger than I'll ever be able to read, and yet I can't resist adding to it on a nearly daily basis. I love to read science fiction & fantasy, graphic novels, and pretty much anything I can get my hands on. I have a couple of blogs, as you can see. One is primarily my photography, while the other are my book reviews. If you have any questions, feel free to reach out!
View all posts by Liz (AKA Cat) →
This entry was posted in Comics, Graphic Novels, Uncategorized and tagged Book, Book Review, Books, Comic, Comic Review, Fantasy, Fiction, Graphic Novel, Literary, Literature. Bookmark the permalink.