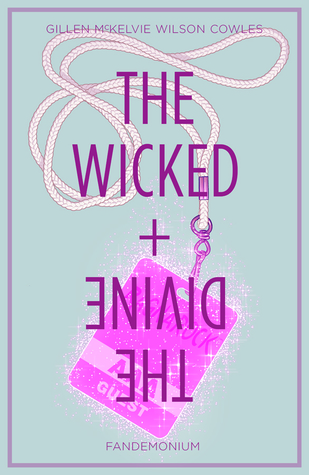 Fandemonium brings back the characters and plots introduced in the first volume of The Wicked + The Divine, and I have to say I’m still loving the world that’s been built here. I know it sounds crazy, but between the writing and the artwork this series really works. When I first heard the plot of The Wicked + The Divine, I’m not going to lie, I thought it was a bit lame and overdone (the whole reincarnation of god/goddess and all), but there’s genuine effort put into the idea, with the end result of a fully developed and fleshed out world.

The plot of volume two picks up a month or two after the events in The Faust Act. Laura is still reeling and grieving over the sudden death of Lucy (aka Lucifer), and she hasn’t been able to create a repeat of that little magic trick she did. So it probably goes without saying that she isn’t exactly in a good place.

Which is more or less where this story starts off; Laura trying to find her place in the world, while also working through some pretty intense emotions (grief, anger, frustration, self-doubt, you name it and she’s probably dealing with it).

We got to know a few of the other gods a bit more during this volume, some are far more kind and interesting than I anticipated, while others are even bigger jerks (cough Woden cough) than I thought (which considering I had a base assumption that these gods would all act like Zeus on Earth is saying something). I would have to say that I think Baphomet and Innana probably got the most screen time this volume, but it’s a close call.

While there was a lot about this volume I ended up loving, I think it was Ananke and her search for the final goddess that was the most compelling part of the story. I won’t say who she found (or which character ended up being reincarnated), because that would ruin the fun, but I loved the twist in it.

Which actually isn’t the only twist in this volume. I know this is an older series, but there’s no way I’m spoiling it, but oh my god that twist! I’m going to have to make one of my friends read this series, just so I have somebody to freak out to about it. Because man do I need somebody to talk to about the cliffhanger ending right now (which is related to the final plot twist, naturally). I was going to try and pace myself with this series, but I’m going to have to start reading volume three the moment I finish writing this review, I think.

I still can’t get over how much I like this series. I honestly thought it’d be a decent read, but not one that would completely suck me into the fandom (ironic I say that now, considering the title of this volume), but I was wrong. I can’t wait to get caught up, even if that means I’ll have an agonizing wait between readings.

I am an avid animal lover, photographer, reader, and much more. While my photography blog is feeling a bit neglected at the moment, the other sites I'm involved in are going strong. ✧I review books, comics, and basically anything else in the literary world over at Quirky Cat's Fat Stacks (of Books). ✧I review comics and books, as well as write content for Word of the Nerd. ✧I review comics for Monkeys Fighting Robots. ✧I write content for Screen Rant and CBR. ✧I write book reviews for The Review Crew.
View all posts by Liz (AKA Cat) →
This entry was posted in Comics, Graphic Novels, Throwback Thursday, Uncategorized and tagged Book, Book Review, Books, Comic, Comic Review, Graphic Novel, Literary, Literature, Review. Bookmark the permalink.