Review: Doctor Strange and the Sorcerers Supreme, Volume 1: Out of Time 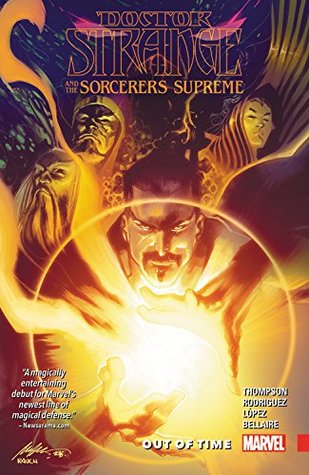 Have you ever wanted to read a series where multiple Sorcerers Supreme showed up to try and help save the day? That’s pretty much the plot of this series; though naturally there are a few hitches. Still, if you’re greedy for Doctor Strange material (like myself) I doubt you’ll complain.

As mentioned above we see multiple Sorcerers Supreme gathered here to help fight a common for. They were brought together by none other than Merlin (yes, that Merlin); it should have been a perfect team, right? Well…not so much. It seems that whatever spell/item Merlin used to pull the Sorcerers Supreme from their timelines wasn’t terribly…precise. I’m sure you can already guess where this is going.

Doctor Strange is the Sorcerer Supreme of our time, but anyone that’s been following the latest continuity knows there’s a problem with that. Magic was almost completely eradicated, which includes the very magic that Doctor Strange uses. It is this timeline that Doctor Strange got pulled from (as opposed to the prime of his career or really any other point). I’m sure you can guess the reactions from the other Sorcerers Supreme. To say they were unimpressed would be putting it kindly.

The Ancient One is another Sorcerer Supreme Merlin pulled…but again with a catch. Merlin grabbed Yao (his true first name) before he had completed (or really even started) his venture to find the Fountain of Youth. It’s before he became the wise man we’re all so used to, while he was still brash and frustrating and the type of kid that refused to listen to his elders. In short, he’s the polar opposite of the Ancient One we’re all used to. It was interesting to see him that young, but also frustrating (for obvious reasons). He was easily Doctor Strange’s loudest critic, which is so ironic I can’t even put words to it.

Other Sorcerers Supreme include Kushala (Demon Rider), Sir Isaac Newton (yes, you read that right), and Nina (The Conjurer). There are others of course, but these ones hold the most attention of the series so far.

This is a series with a lot of twists and sudden changes of events, which considering the heavy magic use going on isn’t that surprising. The original enemy the Sorcerers Supreme are meant to be facing are called the Forgotten, but as we learn their abilities and origins things start to change. Before you know it we’re introduced to a new foe, this one even more surprising than the last.

I think this is a series that needs a bit if time to build up before it gets good. It’s trying to accomplish so much in the little bit of time that it has, that it frequently felt rushed. I think I would have enjoyed it more had it taken a slightly more leisurely pace. I certainly would have loved to learn more about the other Sorcerers Supreme featured (though perhaps that will still happen, as the series is continuing).

I am an avid animal lover, photographer, graphic designer, and much more. I love to create art, and am willing to try any artistic technique at least once. I am particularly fond of artworks involving a lot of emotion and color. The purpose of my blog is for me to be open and honest with myself and the world about my attempts to grow as an artist. My other major passion is reading. My TBR pile is larger than I'll ever be able to read, and yet I can't resist adding to it on a nearly daily basis. I love to read science fiction & fantasy, graphic novels, and pretty much anything I can get my hands on. I have a couple of blogs, as you can see. One is primarily my photography, while the other are my book reviews. If you have any questions, feel free to reach out!
View all posts by Liz (AKA Cat) →
This entry was posted in Comics, Graphic Novels, Uncategorized and tagged Book, Book Review, Books, Comic, Comic Review, Graphic Novel, Literary, Literature, Review. Bookmark the permalink.