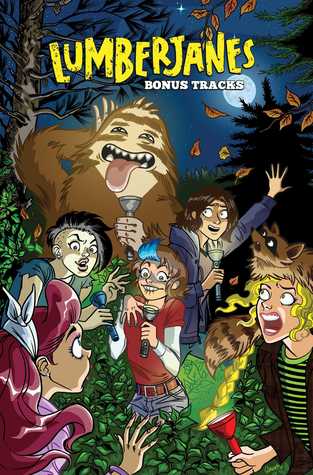 Lumberjanes: Bonus Tracks is a collection of the one-shot and special issue stories that have been published so far for Lumberjanes. These are the stories that were published separate from the main plot, and had their own naming (no number involved). I personally always forget to grab these sort of issues when they come out, so I was really happy to see they made a collection of all of them together.

The issues included are: Beyond Bay Leaf, Makin’ The Ghost of It, Spinxhes and Riddles and Wishes Oh My!, Faire and Square, and Las Estrellas Del Campo: Edicion Lumberjanes. Every issue has its own set of guest authors and artists, which is pretty cool; unless you don’t like change.

Like any Lumberjanes story, the short stories included in this collection are light and fun, but also have a deeper point hidden inside them. It was fun having a chance to read a bunch of Lumberjanes plots that got wrapped up relatively quickly – not that I have any problem with longer term plots (they’re actually what I prefer to read).

I did notice a trend in a few of these issues (I almost wish they trend had lasted through all of them); Jen is the instigator in a couple of the Lumberjane adventures. I understand that she is dragging their butts out to try and teach them things (that sort of is the point of the camp after all…) but sometimes I feel like the woman is tempting fate, you know?

Beyond Bay Leaf happens because Jen insisted the Roanoke cabin get up in the middle of the night and go stargazing. I mean, really? Who honestly thinks it’s a good idea to have a cabin full of mischievous kids like the Lumberjanes out at night, with only one adult to supervise? Not convinced? Need I remind you that Ripley is one of those campers? So of course it’s really no surprise at all when she runs off after spotting a ghost pony. It’s also no surprise that the rest of the cabin (minus Jen) run off after her.

So yeah, a whole cabin of the Lumberjanes, lost in the woods, at night. That’s actually not terribly different from some of the other situations they’ve been in, is it? So no surprise there either. The adventure they have is a pretty good one, and parts of the story truly reminded me of The Last Unicorn, so major nostalgia points there!

Makin’ the Ghost Of It is another one of the stories that happens solely because of Jen’s insistence. Also, side note: I would have guessed that titles for the first two issues had gotten swapped, but my brain just keeps wanting to focus on the ghost pony, so that may be why. Anyway, Jen dragged the Roanoke cabin out to do some foraging and plant identification. Which is kind of cool, but also a germaphobes nightmare (seriously – asking somebody to eat plants right out of the ground, without washing it first? No wonder some of them freak out).

To Jen’s credit, this one didn’t really sound dangerous at first glance (going on a nice hike in the middle of the day, no big deal), until the abandoned mining camp is mentioned. Um, what? Apparently there’s a mining camp up the mountain that was abandoned after the gold rush craze. Naturally there’s a ghost story to go along with it (of course), which Jen delights in telling them.

Honestly, I’m surprise the story ended up as it did. I would have been willing to bet that the cabin would have wound up in the middle of an actual ghost hunt or something. Jen needs to stop putting ideas in their heads.

I feel like Sphinxes, Riddles, and Wishes, Oh My! Is probably the shortest story in the collection. Maybe it just feels that way though. I didn’t actually count the pages. This one is all about Ripley; she’s telling the story of how she ‘saved’ Jen. It’s a fun and light read, while also giving us a quick peek at how Ripley’s mind works.

Faire and Square (I keep wanting to write ‘squire’ there) is a fun issue, and probably one of my favorites from the collection. The Roanoke cabin heads off to a Medieval faire (too bad they hadn’t invited the other cabins), which apparently happens somewhere in the woods by the camp. Apparently there’s quite a lot that happens in these woods. Anyway, while there Molly enters the archery competition, which leads them off onto another quest (literally).

It’s a cute story with everyone having to work together. Also, unlike the other stories I feel like this one really gave each camper a moment to shine. I don’t mind the stories that focus on one of the Lumberjanes specifically, but sometimes it’s nice to see them all like this.

Las Estrells Del Campo: Edicion Lumberjanes is the last issue in the collection, and it’s another Ripley heavy story. Ripley is adorably close to her family (something that’s been hinted at multiple times, but the depth of which hasn’t really been revealed), to the point where they’ll write her letters detailing every episode of her favorite show as it airs. Which is actually pretty sweet. That is until they miss an episode, throwing Ripley into wave after wave of despair and withdrawal.

Which is something the Lumberjanes are more than willing to step up and help out with. This was a pretty cute issue, on the whole. Everyone in the cabin rallied together to try and help Ripley’s mood out, and it was really sweet seeing how close Ripley is to her family. It’s nice to know that some of the girls have a good family life at home (I feel like they’re fairly evenly balanced, on family lives for everyone, but sometimes the bad seems to outweigh the good).

Overall I loved this collection of short stories. I really hope they continue to bundle the stories up like this, since I’m really bad at noticing the issues when they’re not part of the main story (read: when they’re not numbered and located in the same spot of the store; I’m silly like that).

I am an avid animal lover, photographer, reader, and much more. While my photography blog is feeling a bit neglected at the moment, the other sites I'm involved in are going strong. ✧I review books, comics, and basically anything else in the literary world over at Quirky Cat's Fat Stacks (of Books). ✧I review comics and books, as well as write content for Word of the Nerd. ✧I review comics for Monkeys Fighting Robots. ✧I write content for Screen Rant and CBR. ✧I write book reviews for The Review Crew.
View all posts by Liz (AKA Cat) →
This entry was posted in ARC, Comics, Graphic Novels, Uncategorized and tagged ARC Review, Book, Book Review, Books, Comic, Comic Review, Graphic Novel, Literary, Literature, Review. Bookmark the permalink.