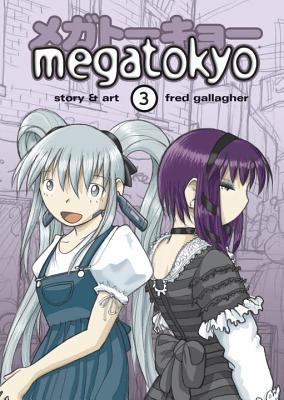 Onward with my re-read through of Megatokyo! Week three brings us to volume three (because of course), and I’m starting to hit the point where I’m really remembering what I loved about this series. I was a bit worried in the past two volumes, so I’m thrilled to find myself immersed in the world again. Clearly this series does hold up; you just have to get through the intro first.

Megatokyo Volume three is actually chapter two…which is admittedly a bit confusing, but considering they’re adapting an online webcomic to print I’m sure some odd things are bound to happen. This volume contains the entire second chapter, as well as a bunch of bonus content in the end (art days, funny comics, short stories/comics, that sort of thing).

The third volume is where Megatokyo really hit its stride. No longer having to worry about introducing characters or establishing the world; the creative team was free to focus on the plot, character interactions, and the humor. This made for an all-around great third volume.

I’m sure we all have our own preferences for this series, but the great thing is there’s a little bit of everything for everyone. Want to focus on the insane side of humor? Largo’s plot. Want to focus on the romantic relationships? That would be Piro’s story. Craving some awkward social interactions? Again, Piro. Want to read about an advanced robot (well, playstation accessory)? Follow Ping’s side of the story. Love goth chicks with secret motivations? Miho is your girl. I could keep going, but you get my point.

Personally I love the character interactions the most (though I’m not saying Largo can’t be hilarious at times), which is great because this volume is really full of them. Poor Piro is getting bombarded by all sides and he doesn’t even know it. It’s actually pretty cute and endearing, in its own way.

I’m also thrilled to see them further developing Ping and her plotline. I knew it was coming, but a lot of the details have gotten fuzzy with time, so I don’t really remember specifics. I am happy that they’re taking the time to work on her character; she is a more difficult one to establish, as they have to figure out/decide just how human she is in the process.

While I had been concerned because of the first two volumes, I’m now happily reading the series as they come along. Having loved volume three, I’m no longer worried about how well this series held up. I’m really looking forward to further character development for everybody introduced. Luckily I have three more volumes on hand, so I can just move right along.

I am an avid animal lover, photographer, reader, and much more. While my photography blog is feeling a bit neglected at the moment, the other sites I'm involved in are going strong. ✧I review books, comics, and basically anything else in the literary world over at Quirky Cat's Fat Stacks (of Books). ✧I review comics and books, as well as write content for Word of the Nerd. ✧I review comics for Monkeys Fighting Robots. ✧I write content for Screen Rant and CBR. ✧I write book reviews for The Review Crew.
View all posts by Liz (AKA Cat) →
This entry was posted in Comics, Graphic Novels, Throwback Thursday, Uncategorized and tagged Book, Book Review, Books, Comic, Comic Review, Graphic Novel, Literary, Literature, Review, Throwback Thursday. Bookmark the permalink.