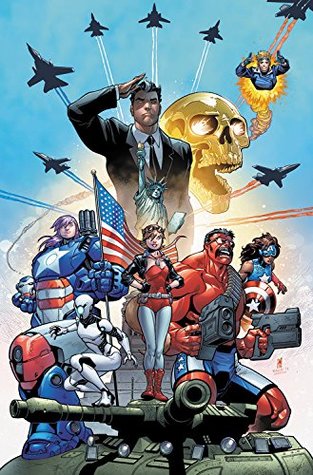 U.S. Avengers is a different type of Avengers series, nothing like what we’re used to. A.I.M. has been bought out by a billionaire (apparently they made the mistake to go public?) and now funds this U.S. Avengers, as well as being a division of S.H.I.E.L.D. Pretty different, no? I’m not sure how I feel about it, to be honest. I like the idea of a billionaire stepping in like that, but not so sure about the rest.

The U.S. Avengers team consists of Citizen V (AKA Roberto da Costa, and the very billionaire that bought out A.I.M.), Iron Patriot (AKA Toni Ho, but she refuses to use lethal weapons, making her a very different Iron Patriot then we’re used to), Red Hulk (AKA General Robert L. Maverick, he can only be Red Hulk for an hour every day and a half), Cannonball (AKA Sam Guthrie, nice guy, his wife and baby are out in space right now, so he has a long commute to work), Squirrel Girl (AKA Doreen Green, do I really need to say more about her? She likes squirrels and nuts), and finally Enigma (AKA Aikku Jokinen, I haven’t fully figured out her suits abilities yet, but it’s very different from other tech we’ve seen). While in appearance they have nothing in common, they all love America and what it stands for (even though most of them are not native – a point they want us well aware of) and thus want to defend it with everything they have.

So, this was different. A.I.M. being the good guys, well mostly. I have no doubt there are still a few bad eggs hiding in there, but that’s beside the point. A.I.M. are now the good guys, acting as a part of S.H.I.E.L.D. and running the Avengers. I can’t really wrap my brain around it, to be honest.

As for the heroes introduced? I’m going to be honest, other than Squirrel Girl I didn’t know any of them before this. Which would be fine on its own, except they frequently talk like I should know them (mentioning past events without explaining them, etc, which got old pretty fast. Plus there’s the specific oddities of the characters themselves, some I’m ok with, some less so.

Citizen V is one of the characters I feel like I’m supposed to know (they mentioned he used to be an X-Men, which is where my comic history is lacking, maybe that’s it?). As of now I don’t know what he can do, other than rally money and morale. Iron Patriot…well…like I mentioned she’s all about the non-lethal weapons. Her suit looks like Stark tech, but apparently it isn’t. The whole thing is just a bit odd to me, to be honest. But they’re also setting up for something bigger with her character I think (she’s obsessed with making bigger and better tech, and even in this one volume her suit triples in size by the end). I’m not sure where it’s going to go, so I’ll wait and see before I pass judgment I guess.

Red Hulk is an interesting character; though he reminds me a lot of General Treister from Venture Brothers. Maybe that’s why I like him? Anyway, he’s not a natural Hulk, and by that I mean he isn’t a Hulk in the same sense as all of the others. He can choose when to “turn on” the Hulk mode, though it’ll only last an hour, and he can’t do it again for over a day. Interesting catch, I think I like it, but we’ll have to see how it goes.

I feel like I should know more about Cannonball than I do. He feels like one of those characters that shows up in a lot of other comics, you know? Apparently he appears (in the background?) in Captain Marvel’s plot, which was a surprise to me. I’m not sure where that plot is leading though. I doubt they killed him off? Who knows.

Squirrel Girl is pretty obvious, though I’m not sure how well she fits in with this group? I guess they felt they needed some humor or a bigger name to help anchor it. But I don’t know that for sure. I haven’t really read her series, so I can’t pretend to know everything about her.

Finally there’s Enigma. I love her design, both in and out of the costume, though again I don’t know much about her. She seems cute and kind of mild mannered. Though her name makes me think of the Riddler (E. Nigma), which makes me chuckle. Right now she feels pretty underdeveloped, though again I’m not sure if she was created for this series or if she appeared somewhere else first.

As for the plot, it was pretty subpar on the whole. Not awful, but they certainly could have done better. Though there are lots of cameos, so there’s that. Captain America (Danielle Cages), Deadpool, Captain America (Steve Rogers, AKA Stevil, the Hydra version of Steve), and Smasher (Izzy Kane, Cannonball’s wife) all make an appearance, as does Professor Xavier, though that’s in flashback form.

Everything off about this series could just be symptom of the ‘new series settling syndrome’ (I totally just made that up), so I’ll probably read another volume or two and see how it goes. Assuming it makes it that far, that is. I figure if they keep making enough sales to justify it, maybe there’s something there?