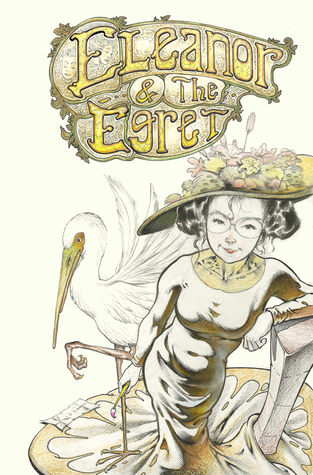 I received a copy of Eleanor and the Egret from NetGalley in exchange for a fair and honest review.

Eleanor & the Egret is a short series from the minds of Sam Keith (The Maxx, Zero Girl) and John Layman (Chew). It was the cover that initially caught my attention for this series – the Victorian style dress with the light color palette complimented by a giant Egret. Wait, what? Yep, that’s Eleanor & the Egret all right. If you’re looking to dive into a fantasy world of the nonsensical variety, then I highly suggest you give this series a try.

I wasn’t really sure what to expect from this series, if I’m being honest. Yes, I knew it was about Eleanor and how she and her Egret stole paintings. I didn’t really know the why yet, or really even the how. Surely there had to be a reason for a girl and her pet to end up this way? Unless she’s a criminal straight out of the Pink Panther universe (on second thought…I’d be okay with that).

Upon looking at the cover of the graphic novel (and really, any of the issue covers as well) I pictured an elegant and classical art thief. Which considering the sorts of outfits we see her wearing on the cover, I feel justified in this assumption. However Eleanor dressed very differently inside the covers of this comic, which was a little surprising, but it ended up just adding to her charm.

So as the title indicates, Eleanor has a pet Egret (named Ellis, for those that are curious). While this is certainly odd, it’s hardly story worthy. What makes it a standout series is the fact that little miss Eleanor and her great white Egret are actually master criminals. They steal art, and the reasons for their thievery are even more intriguing than the thefts themselves.

As little details are unveiled to tell us this enchanting story, I found myself enjoying it more and more. There’s a whole world that Eleanor resides in, and that world has rules – though naturally that means some are compelled to break them.

The world itself is endearing to say the least – many (if not all) of the characters can be seen with an animal companion by their side. Rarely do we see anyone without, though it also doesn’t appear to be a requirement (of the magical sort) to have one either. It’s a small touch, to be sure, but for me it enhanced the world significantly, and I imagine many other animal lovers would agree.

As for the mystery of the art thieves and why they do what they do…now that is an interesting tale. I’ll let you read it, as it’s better told in graphic novel form, but trust me when I say it’s worth giving it a shot.

The artwork for this series was wonderful – in many ways it reminded me of the Steampunk style of drawings, but at the same time it held its own and managed to stay different at the same time. The color palette is light, almost sepia toned. It’s actually a wonderful combination, on the whole.

I am an avid animal lover, photographer, reader, and much more. While my photography blog is feeling a bit neglected at the moment, the other sites I'm involved in are going strong. ✧I review books, comics, and basically anything else in the literary world over at Quirky Cat's Fat Stacks (of Books). ✧I review comics and books, as well as write content for Word of the Nerd. ✧I review comics for Monkeys Fighting Robots. ✧I write content for Screen Rant and CBR. ✧I write book reviews for The Review Crew.
View all posts by Liz (AKA Cat) →
This entry was posted in ARC, Comics, Graphic Novels, Uncategorized and tagged ARC Review, Book, Book Review, Books, Comic, Comic Review, Graphic Novel, Literary, Literature, Review. Bookmark the permalink.