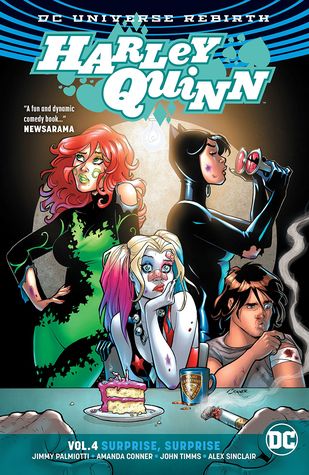 Surprise Surprise continues the fun of the Harley Quinn Rebirth series. You could technically jump in here (or anyway else) and get a feel for things, but you would be missing out on a lot of the events and context. This volume has issues 22 through 27, as well as the Harley Quinn 25th Anniversary Special. I’m not going to lie; it’s hard to believe that our little Harley has been around that long. Man does time fly.

So this probably wasn’t my favorite of the Harley Quinn volumes; mostly because the plot is a little on the scattered side. We’ve got the visit from her parents, the Penguin dilemma, the party, plus all the short stories in the Anniversary special. I know Harley is pretty much the embodiment of chaos…but a structured plot is always appreciated!

I’ll confess it was cute to see Harley’s parents. I’ve always wondered what they know, and exactly how much of the truth she’s been telling them over the years. I mean, I’m sure they’ve seen her running around on TV as Harley (no doubt they’d be able to recognize her), so the makeup routine to look ‘normal’ is probably not needed (they maybe they think the Harley tone is the makeup color?). Her parents seem pretty cool on the whole, though I think they should still be more worried/concerned about the Joker than they seem to be. There’s no way they don’t know who is or how bad he can be (and even if they thought her calling her now-ex by the name ‘Joker’ was a joke, again surely they saw them on TV while running one of their escapades?).

Anyway, moving on; Harley gets a surprise birthday party (a month before her actual birthday party) courtesy of all of her new friends and family (though I think it was originally Red Tool’s idea?). It’s a cute, fun plot on the whole. The highlight is their canonization of Harley and Ivy’s relationship (they’ve been dancing around that subject and teasing the fans for far too long). So if you’ve been growing frustrated with that point (I know a lot of people who feel like that), then you’ll be happy to know they actually did something about it.

I couldn’t really sink my teeth into any of the short stories included in the anniversary special. It could have been because the change of art styles threw me (that always happens to me, I hate it), or it could be I didn’t like the lack of structure that followed a pretty loose plot. More likely it was the combination of the two. So while these stories are funny, I wouldn’t say any of them were worth writing home about.

On the whole if you’re looking for an easy and quick read that’ll make you snort; Harley Quinn is always a good option for you. Sometimes the plot gets heavier of course, but not this particular volume. So you’re safe to indulge in the absurdity of it all.