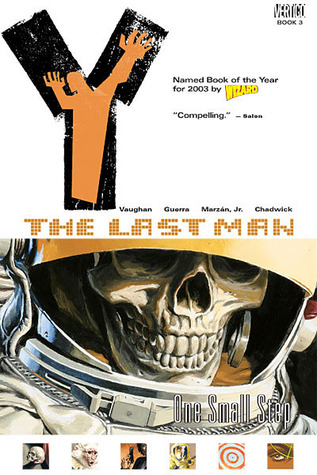 Continuing the epic saga of Y: the Last Man is our original creative team (thank goodness) and they’re not afraid to take risks and try something new. I think that’s why I’m enjoying this series so much. Sure, it can be insanely heavy and a little depressing at times, but it also carries important messages and tries to explore the world that’s been created. So far I’ve been pretty fascinated with their interpretation of what would happen in a world without men, and I doubt that’s going to be changing anytime soon.

There are two main plots for volume three, and I’ve got to say, at least one of the two will make you feel things (I suspect the other will make you laugh – at least it did for me). The first plot continues and concludes the one hinted at in the end of volume two; there are two men out in space, and they’re alive. I wasn’t really sure what to feel when I saw that bit of news. What would happen to Yorick, if he suddenly became one of three of the last men on Earth, rather than the last? Would he be in more danger? Less? Would he be free to peruse his other goals (such as finding his girlfriend/fiancée) or would the sudden pressure release make him go a bit crazy?

Of course, being that this is one of Vaughn’s stories, it’s not as simple as just getting these men back on Earth; that is if you’re willing to consider landing a crumbling shuttle easy. The team that has been tracking Yorick is still on his trail, and I don’t know how they’d react to hearing about two more men, to say the least. Plus one has to assume the Amazon’s are still out there, even if they’re leaderless. Then there’s the concern of the men’s health – will they become infected upon arrival, or will their spacesuits protect them? Will the hot suite they’ve found be enough? (Speaking of, why didn’t any men make it to the hot suite in time? What a shame).

In a way I sort of anticipated the twist that was going to happen with the astronauts. Not the specific details of course, just the direction their path was going to go down. It’s far too early to be having change like that; the series still has another seven volumes to go after all.

The other plot introduced is a lot lighter in tone (in my opinion) but it also takes the risk of focusing on some other characters (ones that we’ve never met before). Here we are introduced to a troop of actresses and playwrights; they put on plays in exchange for food (a pretty fair trade, considering the lack of entertainment many women would be dealing with) and are desperately trying to find meaning in the world they’ve been thrown into. Well, most of them are at least.

I didn’t miss the irony in having an all women cast; all male roles are played by women. As was once the case in reverse in traditional plays. The actresses don’t miss the irony either, of course. This combined with their current play almost throws us into ironic overload; it’s about the last man on Earth. Yes, you read that right. But no, it isn’t about Yorick. It’s about a man they’ve made up, but is inspired by their discovery of Ampersand, which is pretty hilarious when you think about it.

One has to wonder if there was any foreshadowing done here; we’re told (but not shown) how the play ends, and while Yorick expresses disgust at the idea, it has me wondering. I would sincerely hope it doesn’t end that way, but with a subject like this, one never really knows.