Review: All-New Guardians of the Galaxy Vol. 2: Riders in the Sky 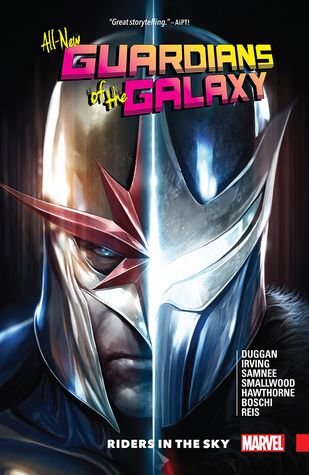 Riders in the Sky continues the latest round in the Guardians of the Galaxy reboot. If you look at the issue numbers included, they’re a little bit all over the place (as was the first volume, if you recall). Likely they sorted the issues into a different order for the volumes, in order to tell a specific story. Most of the stories here are more along the ‘one-shot’ sense, where they only last a single issue.

As mentioned above, there are several plots/stories for this volume, five in total. The first four focus on each of our heroes (with Rocket and Groot grouped together), and the last is more along the lines of the main plot already started, a feeling that is confirmed by its multi-issue nature.

Gamora gets the spotlight first; honestly before this I had been thinking I missed something from Guardians of the Galaxy (perhaps everything happened in another series?) but now I realize it was just some creative storytelling. The whole run of the All-New Guardians of the Galaxy, Gamora has been obsessing about getting to the soul stone. What I didn’t really understand was why. Or more accurately, I didn’t know the details leading up to that point. Through context I understood that Gamora believed that part of her soul was trapped in said stone, but I still didn’t understand what events led her to that conclusion. Now that I’ve read this, I understand how the pieces fall together a bit more. It was nice seeing a Doctor Strange appearance as well as several other cameos (most of which occur inside the soul stone, and thus could be considered to be something other than canon? At least they’re not the characters we’ve gotten used to over the years).

Star-Lords (aka Peter Quill) story came next. I’ll confess I was immediately put off by the art style chosen – it felt cartoonish and silly. Admittedly Quill’s story isn’t the deepest of tales, but it was interesting. I loved the concept of being able to find pockets in space that are still transmitting (or more accurately, receiving Earth’s transmissions) specific data he’d want. Specifically, 80’s music. It’s actually pretty cool. Everything around that was a bit on the silly side, so be ready for a more casual read.

Drax’s story is next; and is odd in that it has two points. The first is to blend his experiences with Gamora (as his soul is also trapped in the soul stone), but the other is of his own. Finally we’re given the answer as to why Drax the Destroyer has become a pacifist. I won’t ruin it for you, as it’s truly worth reading (it’s probably the highlight of the volume, or at least one of them).

The last of the one-shot stories also explains previous events – specifically why Baby Groot is well…a baby. It’s easy to forget that the movie and comic Groots are different, and therefore what happened in the first movie wouldn’t affect little Groot. So that raises the question; what exactly happened to him? And why isn’t he growing? (Frankly that’s the bigger concern here). Adding Rocket’s regret, self-hatred, and guilt to the mix really made for an emotional read.

And finally we’re on to the ‘main’ plot. I put that in quotes as I obviously don’t know if it’s the main plot, but I sure hope it all ties in. There are a few noteworthy events that occur (such as both Deadpool and Antman trying to stow away with the Guardians) that are funny, but not really important to the plot. And then there’s the Raptor plot. I was seriously hoping that this was going to become more of a thing in Guardians (and not just because the more we see of them, the more likely we are to get a Darkhawk reboot), and it looks like my wish is being granted! Though I’ll admit I didn’t see that twist coming, not one bit. I’m still digesting it a bit to be honest.

On the whole this was a decent read; four short stories, with varying levels of seriousness, and then diving back into the main story. I can’t wait to see where they’re leading us with the Nova and Raptors plots. I hope they reveal more next issue.