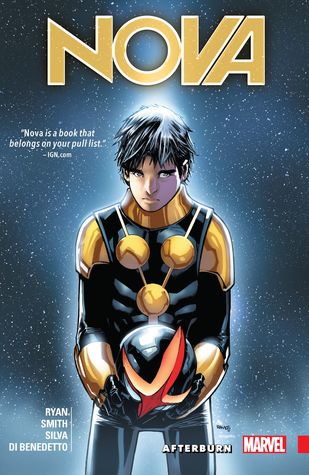 I’m a pretty big fan of nova (as in, Rich Rider’s Nova) so I really wanted to like Sam’s version of Nova. Despite my best attempts I find myself a bit disinterested in the story. Interestingly I think I like the character fine, it’s the plots (or lack thereof) that I find lackluster. I would love to see a Nova story with a heavy hitter author writing the storyline for him. That would be interesting.

This volume seemed to suffer pretty heavily from a lack of direction. At the end of the first volume Nova left us thinking he was going to go off and find his dad, no matter what. That gave me the impression that volume two would be based pretty heavily on his search. Surprisingly that was not the case. Instead we see young Nova struggling to find his place in the superhero world. He seems to float from place to place, not really fitting in anyway (possibly being excluded because of his age). With the two heroes he works with best missing (Ms. Marvel and Spider-Man, both of whom are wrapped up in Civil War II) he finds himself on the outside looking in.

This flitting around by Nova is supposed to show us his uncertainty about his status as a hero. Should he retire and let himself live a normal life? Should he keep doing what he’s doing? What’s the best course of action? After some (sorta deep) soul searching Nova decides that if he can discover how his helmet works then clearly he was meant to be a Nova (ok, he didn’t phrase it that way, but that’s basically what’s going on). While I’m not sure I agree with his logic, at least a decision has been made (finally!).

There were some interesting cameos that occurred, but most of them were pretty minimal on the whole. A scene where everybody (aka all the superheroes) is partying at Starks house and things like that. Having read Civil War II, I can see all the subtle (and not so subtle) hints that Civil War II is happening in the background (from Nova’s perspective, at least). I’m kind of happy that it didn’t take the forefront of yet another comic, though I still feel like the plot for this volume could have been stronger.

It looks like the 2015 version of Nova has come to a close with the end of this volume. I’m sure kid Nova will be brought back around again (just like Rich is being brought back around), but I’m not sure when and in what context. It’ll be interesting to see how all that pans out.