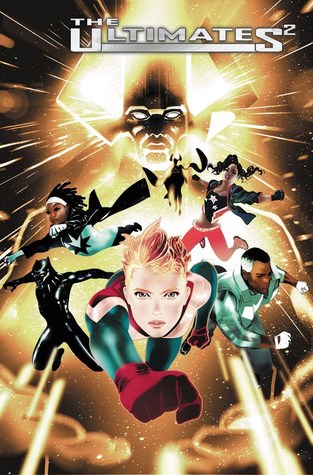 The Ultimates 2 (and Ultimates, for that matter) is a fantastic read for any fan that wants to read more about the cosmic universe in Marvel. Captain Marvel, Black Panther, Blue Marvel, Spectrum, and Ms. America make up the Ultimates. Reading the Ultimates volume one and two isn’t required, but the backstory would be useful to help understand what is happening.

Galactus has changed from being the World-Eater to Lifebringer, and he has assigned the Ultimates to be his heralds. The amount of changes here is outstanding, but one has to wonder what the ramifications of these changes will be. It’s a question I had in my head since volume two of the Ultimates came out, so I’m relieved it’s a subject being touched upon now.

America Chavez (Ms. America) takes the lead on the Ultimates, bridging the gap between them and Galactus (many of whom still have doubts about him). She’s determined to protect the universe once again, and believes that using Galactus is the best way to do so. While I have reservations about throwing oneself so wholeheartedly into a cause dependent on a being like Galactus, I can also sympathize and understand where she is coming from.

As I mentioned briefly above; one cannot change something so integral to the universe without having consequences. In this case, the cosmic beings Order and Chaos unite into Logos to rewrite the rules of the universe (because as they see it, this is already being done, and if that is allowed then there is no reason for them not to do as they wish). The end result is a cliffhanger while the team takes a break to study and learn more about the cosmic world (with Ms. America stating her intention to take up classes on this very subject – the basis of her standalone comic coming out shortly).

Travel Foreman had quite a challenge dropped on his lap; figuring out a way to represent the cosmic universe – one that theoretically could not be comprehended by normal human senses – and translate that into artwork on a page. His use of color was absolutely stunning, and truly lent to the sense of power and scale necessary to represent creatures such as these.

I am an avid animal lover, photographer, graphic designer, and much more. I love to create art, and am willing to try any artistic technique at least once. I am particularly fond of artworks involving a lot of emotion and color. The purpose of my blog is for me to be open and honest with myself and the world about my attempts to grow as an artist. My other major passion is reading. My TBR pile is larger than I'll ever be able to read, and yet I can't resist adding to it on a nearly daily basis. I love to read science fiction & fantasy, graphic novels, and pretty much anything I can get my hands on. I have a couple of blogs, as you can see. One is primarily my photography, while the other are my book reviews. If you have any questions, feel free to reach out!
View all posts by Liz (AKA Cat) →
This entry was posted in Art History, Comics, Fantasy, Graphic Novels, Uncategorized and tagged Book, Book Review, Books, Comic, Comic Review, Graphic Novel, Literary, Literature, Review. Bookmark the permalink.